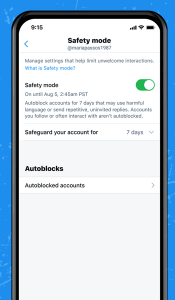 Twitter introduced a Safety Mode on September 1, 2021. Twitter will be testing Safety Mode out with a small group of people on Twitter in the coming months. Eventually, the pool of beta testers will be expanded.

What is Safety Mode? Twitter explains that it is designed to make people feel more comfortable and in control of their experience on Twitter. The feature is meant to reduce the burden on people who are dealing with unwelcome interactions.

Unwelcome Tweets and noise can get in the way of conversations on Twitter, so we’re introducing Safety Mode, a new feature that aims to reduce disruptive interactions. Starting today, we’re rolling out this safety feature to a small feedback group on iOS, Android, and Twitter.com, beginning with accounts that have English-language settings enabled.

What does Safety Mode do? It temporarily blocks accounts for seven days for using what Twitter defines as “potentially harmful language”. That includes insults or hateful remarks, or sending repetitive and uninvited replies or mentions.

Once Safety Mode is rolled out, you can choose to turn it on in your Settings. Once you do that, Twitter’s systems will assess the likelihood of a negative engagement by considering both the Tweet’s content and the relationship between the Tweet author and the replier. According to Twitter, their system takes existing relationships into account. The accounts you follow or frequently interact with will not be autoblocked.

If Twitter’s technology finds a tweet that it identifies as harmful, or uninvited, Safety Mode will automatically block it. Those accounts will temporarily be unable to follow your account, see your Tweets, or send you Direct Messages. To me, it sounds like a temporary form of blocking.

I can see where Safety Mode would be useful, especially for people who are marginalized and often are the target of bullies. Safety Mode would give them the opportunity to be heard without having to deal with harassment. On the other hand, I don’t think Safety Mode should be used by politicians to block out the opinions of the people whom they represent.