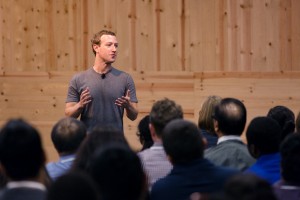 Mark Zuckerberg held a town hall Q&A at Facebook in Menlo Park. He answered questions from people around the world. It has been revealed that Facebook is working on a “Dislike” button.

The question came from a person who lives in Egypt. It was: We need to have more options than just a “Like” button. Why don’t we have other options like “I’m sorry”, “Interesting”, or “Dislike”?

I’ve seen many people discuss this idea on social media, so it’s great that the question was presented to Mark Zuckerberg himself. In his response, he pointed out that he did not want Facebook to become the type of website where people “downvote” other people’s posts. The potential for that to happen appears to be why Facebook doesn’t currently have a “Dislike” button.

Mark Zuckerberg also expressed that he understood that when people ask for a “Dislike” button, it is because they want to use it to convey their sympathy in regards to someone’s post. There are times when a person posts something emotional that is inappropriate to “Like”.

For example, a person might post about a current event – such as the refugee crisis. Their friends don’t want to click “Like”, and may not find the right words to type as a comment. A “Dislike” button could express that they, too, are unhappy and upset about the news their friend posted about.

When it comes to how people chose to use social media, I tend to have a cynical outlook. I can see the “Dislike” button being used by a family member who doesn’t happen to agree with the political slant in an article their relative posted. People could choose to be mean and “Dislike” someone’s selfie. It will be interesting to see how Facebook manages to add a “Dislike” button in a way that prevents it from becoming the equivalent of a “downvote”.