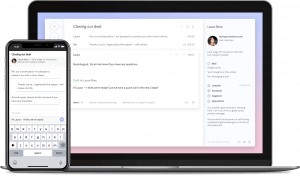 Superhuman describes itself as “the fastest email experience ever made”. That may sound great to people who send and receive a lot of email. Unfortunately, Superhuman was also doing some very creepy, and potentially dangerous, things.

After some very detailed criticism of Superhuman by Mike Davidson, (on his personal blog), the Founder and CEO of Superhuman, Rahul Vorhra, decided to make some badly needed changes.

Mike Davidson pointed out that Superhuman decided to embed hidden tracking pixels inside of the emails that customers of Superhuman send out. Superhuman called that feature “Read Receipts”. It turns on by default for Superhuman customers, and without the consent of the recipients of the emails.

The so-called “Read Receipt” function enables the sender to know how many times the recipient opened that email, the times the email was opened, and the location of the recipient when they opened it. The recipient, who likely is not using Superhuman for their email, has no idea they are being tracked this way. In short, this function enables people to stalk whomever they send an email to.

Rahul Vohra provided details about changes that he would make to Superhuman in a post on Medium. In it, he explains how Superhuman users can turn read statuses off. When you do that, Superhuman will not include tracking pixels in sent emails.

Personally, I think that means that some of the email you receive from Superhuman users will contain tracking pixels. The opt-in does not solve the problem – it allows it to continue.

I highly recommend reading both of those posts in order to get the full details about the situation. The problems with Superhuman could have been avoided if Rahul Vorha and his team had bothered to take the time to get feedback from a diverse group of people before implementing features that invade people’s privacy.