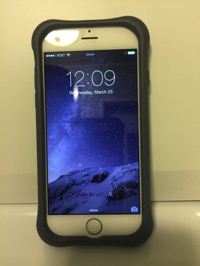 After years of resistance, I have finally become the owner of an iPhone. It is my very first iPhone (and I presume I’ll have to upgrade to a newer one someday). No, I haven’t switched over to Apple’s popular phone from Android. Before this, I was actually using a flip-phone. That flip-phone was the very first cell phone I ever owned, and I purchased it in 2010.

My new iPhone 6 is, obviously, much more versatile than the phone I used before. There is a bit of a “learning curve” happening as I try to figure out what the iPhone can do. I’ll get the hang of things eventually.

So far, I’ve only messed around with “the basics”. My husband, Shawn (who also writes for Geek News Central), helped me to pick out a ring tone and assign another sound that would tell me if I got an iMessage from someone. I used his iPhone 6 Plus to take a photo of my iPhone 6 for this blog.

The first photo that I took with my new iPhone was of the microphone I was using while doing a podcast. (That photo became part of the show notes for said podcast). The first phone call I made was to the local government to find out more about something that was happening downtown. I haven’t taken a “selfie” yet, but I figure it is only a matter of time before I do.

The most useful thing I’ve done with my new iPhone involves an app called Paprika. Shawn and I are both using it via iTunes Family Sharing. In short, the app helps people put recipe ingredients directly into a grocery list.

There’s no doubt that smartphone cameras have improved immensely in the past few years, but they still haven’t reached the quality of a DSLR. Element Case is partnering with optics company Schneider to transform your iPhone 6 into a photography star.

Jamie spoke to Jeff Sasaki, CEO of Element Case, about Element’s new iPro 6 lens case. The sturdy case protects your phone, and the attachable lenses securely fasten to the case to drastically improve the quality of your iPhone’s camera. The range of interchangeable lenses includes wide-angle, super-wide-angle, macro, fisheye, and telephoto so you can create the perfect image every time. And with the ability to attach a handle and/or tripod, iPhone photography has never been better.

The iPro 6 case and lenses will be released Q2 of 2015 with prices between $100-$300 depending on your chosen lens configuration. For more details, check out the Element Case website.