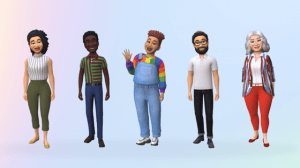 Earlier this week Meta CEO Mark Zuckerberg took to the stage to demonstrate that, having spent billions of dollars to create a virtual reality universe (Horizon Worlds) that looked like it was from 2004, his company was working on improving that universe to make it look like it was from 2009 instead. Integral to this upgrade was the fact that avatars would no longer be mere floating torsos, but would soon have legs, Kotaku reported.

Today’s model is clearly an extension of that early rendering, and finally brings the VR platform past the likes of Fire Emblem: Awakening on the Nintendo 3DS, another game that lacked legs. And that was with Meta only spending $10 billion this year on the technology. Who knows what another small fortune will bring? If anything, can catapult the Oculus storefront into the green, it’s a burgeoning market for VR feet pics. It might seem like we’re being ridiculous here, but do know that the live chat alongside the virtual audience watching all of this unfold absolutely exploded when Zuckerberg started talking about feet.

The Verge reported that during Meta’s Connect conference on Tuesday, Mark Zuckerberg made a huge announcement: the avatars in the company’s Horizon VR app will be getting legs soon. To demonstrate this groundbreaking technical achievement, Zuckerberg’s digital avatar lifted each leg in the air, then did a jump, while Aigerim Shorman’s avatar kicked into the air.

It turns out that the demonstration by Zuckerberg and Shorman was somewhat misleading. Ian Hamilton (VR Journalist, UploadVR Editor) tweeted: “For those who’ve been wondering about the legs shown in the Connect keynote … Meta: “To enable this preview of what’s to come, the segment featured animations created from motion capture.”

On October 11, Meta mentioned legs on post about Meta Connect 2022. “It may sound like we’re just flipping a switch behind the scenes, but this took a lot of work to make it happen. When your digital body renders incorrectly – in the wrong spot, for instance, it can be distracting or even disturbing, and take you out of the experience immediately. And legs are hard! If your legs are under a desk or even just behind your arms, then the headset can’t see them properly and needs to rely on prediction”.

Meta continued: “We spent a long time making sure Meta Quest 2 could accurately – and reliably – bring your legs into VR. Legs will roll out to World’s first, so we can see how it goes. Then we’ll begin bringing legs into more experiences over time as our technology improves.”

All of this sounds incredibly strange to me. The image at the top of this blog post comes from Meta’s blog. It gives me the impression that the legs that will eventually come to Horizon Worlds could be static and unable to allow an avatar to jump or kick into the air. Some people are going to be very disappointed. 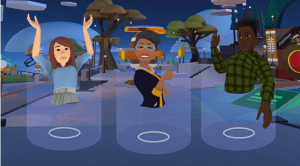 Meta announced that they are adding a Personal Boundary for Horizon Worlds and Horizon Venues. The Personal Boundary prevents avatars from coming within a set distance of each other, creating more personal space for people and making it easier to avoid unwanted interactions.

A Personal Boundary prevents anyone from invading your avatar’s personal space. If someone tries to enter your Personal Boundary, the system will halt their forward movement as they reach the boundary. You won’t feel it – there is no haptic feedback. This builds upon our existing hand harassment measures that were already in place, where an avatar’s hands would disappear if they encroached upon someone’s personal space.

According to Meta, the Personal Boundary is always on, by default. The reason is because Meta wants to use it to help set behavioral norms in virtual spaces. That said, it is possible for two people to willingly choose to extend their arms outside of their Personal Boundaries in order to do a high-five or a fist bump.

The Verge provided some background that could have been the reason why Meta added the Personal Boundary. According to The Verge, when Horizon Worlds was in beta testing, at least one beta user complained that her avatar had been groped by a stranger. The Personal Bubble gives everyone a two-foot radius of virtual personal space, equating the equivalent of four virtual feet between the avatars.

Personally, I think that Meta is doing the right thing by instituting a Personal Boundary. It shows that they understand that some of the people who want to experience Horizon Worlds or Horizon Venues will choose to behave badly towards others. The Personal Boundary makes it impossible for them attempt to grab, grope, or sexually assault someone in the VR setting.