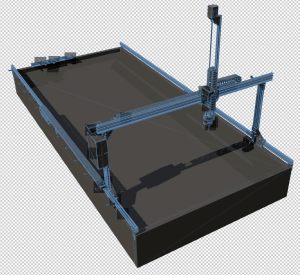 The promise of a work-free life, where mechanical devices do all of humanity’s drudge work has been little more than just that; a promise. And while we’re still a long way away from a time when we’ll be able to sit poolside all day, sipping fruity drinks, while armies of robots take care of the cooking, cleaning, and other mundane tasks, there is evidence that we’re coming slightly closer to that utopian vision. One such bit of that proof comes in the form of FarmBot, billed as “Humanity’s first open-source CNC farming machine.”

FarmBot may not look like the shiny gardening bot of your android dreams. But it is an innovative idea that makes growing your own vegetables fun and easy. Prospective farmers can use a computer app to plan out a garden using a game-like interface. Then, FarmBot plants seeds and waters them as needed. FarmBot operates 24 hours a day, tending your plants day and night.

FarmBot takes a variety of factors into consideration as it handles your plants:

FarmBot allows growers to plant many different types of plants at one time. This creates a more natural bio system to occur within the garden, which can yield crops that are healthier and more nutritious than those created by large-scale industrial agricultural operations.

FarmBot is an open source project. All of the software and documentation needed to built and operate your own FarmBot is free to be downloaded and manipulated. If you’d like to just buy a FarmBot, the creators of the platform are currently selling FarmBot kits at a 25% discount for a total cost of $2,900.00.

Apple announced their social network Ping would be removed in the next version of iTunes. It didn’t build the excitement as Apple wanted it to. Because of the integration of Facebook with iOS6, and also integration with Twitter, Apple decided to retire the network.

Ping was announced on September 2nd, and saw 1 million users in the first 48 hours. After that, it didn’t see the growth it wanted. Of course, it didn’t help to be behind the walled iTunes garden. Since the announcement that Facebook will become integrated in iOS6, it makes one wonder if Ping will get replaced with Facebook or Twitter. That way, you still have a social network in iTunes.

With a social network in iTunes, you can have people publicly announce what they are watching and listening to. It’s technically free advertisement to say “Hey! Buy from iTunes, because your friend Joe did!”. So it only goes to see the integration happen. Either that, or turn iTunes into web-based software.

According to All Things D, Ping will be removed in the next major revision – coming out this Fall. In the meantime, when you download something from the iTunes, store, just choose the drop-down and share on Twitter or Facebook.