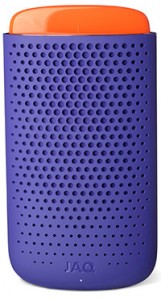 It wouldn’t be CES without a fuel cell-based smartphone charger making an appearance, and as expected Swedish company myFC turns up with the JAQ, the world´s smallest pocket-sized fuel cell charger. CEO Bjorn Westerholm shows Daniel and Todd the colourful charger.

The winner of a 2016 German Design Award, the charger consists of two parts; an inner replaceable PowerCard (orange) and the outer JAQ fuel cell (blue). The PowerCard is made from water and salt and when mixed, hydrogen is produced which is then combined in the fuel cell with oxygen from the atmosphere to generate electricity along with waste water. The card is thrown away once discharged.

A single PowerCard provides 1800 mAh though with additional PowerCards, more power is available. The best use case for the JAQ and the PowerCards is when the owner is far away from an electrical power source, say, camping.

The PowerCards are expected to retail for under US$2 and the fuel cell itself will be rented for around $5 per month as part of a phone contract. JAQ is expected to be available soon.

While USB battery packs are ubiquitous, they’re only any good if there’s somewhere to charge the battery pack in the first place. If there’s no electrical supply, options can be limited but with Intelligent Energy‘s new hydrogen fuel cell, Upp, there’s one more option available. Todd and Jamie get enthused with Julian Hughes of Intelligent Energy.

The Upp fuel call consists of a hydrogen micro generator and reusable fuel cartridge. One fuel cartridge gives approximately five full smartphone charges and is approved for carriage in aircraft. Each cartridge has a shelf-life of nine years, making it perfect for storage for emergencies. As it’s a fuel cell, not a battery, it doesn’t need charged from the electricity. Once turned on, the Upp with power devices at 1A via a full size USB port.

When spent the fuel cartridges can be recharged with hydrogen and extra cartridges can prolong time off grid. It’s perfect for those on long hiking trips or for those involved in emergency disaster relief.

The Upp is available in the UK for £149 including one cartridge. Additional cartridges are £49 and recharges costs £5.95. The Upp is expected to come to the US later in the year. Tom interviews Kyle from Horizon Fuel Cell Technology which is introducing the world’s first consumer hydrogen fuel cell to the market. It’s been a long time coming and I think we’ll see more of these over the next few years.

Marketed as a USB charger for portable electronics, the hydrogen-filled HydroStik plugs into the MiniPak (the fuel cell) and generates electricity by combining with oxygen from the environment within the fuel cell. There’s a complementary home hydrogen generator, the HydroFill, that will re-fill the HydroStiks.  The MiniPak is hand-sized and each HydroStik will be able to re-charge a smartphone a couple of times.

The system will be priced at $99 for the MiniPak and two charged HydroStiks. The ‘Stiks alone are $9.99 and the HydroFill charger is expected to be in the $150-$200 range. Available towards the end of 2011.

Interview by Tom Newman of The Fogview Podcast.