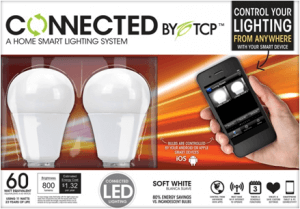 For the past couple of years I have gotten interested in home remote access devices and methods. Initially I started with inexpensive remote-access IP cameras. I next moved on to getting the original Nest thermostat, which I still have and has been worth every penny. You can read about my experiences here.

Lately I’ve been wanting to be able to remotely turn lights on and off. Let’s say I come home after dark. It would be nice to be able to turn on a porch light from my smartphone. How to accomplish this?

My next thought was the Phillips Hue lighting kit. The Phillips Hue would certainly work for what I was trying to accomplish, but it seemed to be rather expensive overkill. The Phillips Hue kit of 3 bulbs and the controller sells for $200, with additional Hue bulbs priced at $60 each. Sure, the Phillips Hue can display up to 16 million colors, as well as connect to really cool services such as If This, Then That, but that really seemed a waste for exterior deck lights.

I continued to look, and I ran across an even better solution on the Home Depot website. Home Depot currently sells the TCP Connected Smart LED Light Bulb Starter Kit with (2) A19 LED Light Bulbs for $79.97 which is substantially cheaper than the Phillips Hue 3 bulb kit. They also sell the TCP Connected A19 bulbs sell for $16.97 each on their website. The TCP controller which must be plugged in to an Ethernet port on the home router can handle up to 50 bulbs each.

Initial setup of the TCP light kit is a breeze. I installed the TCP LED light bulbs into the external deck light fixtures. They are the same size and shape as a traditional incandescent bulb so there was no problem making them fit in the fixtures. They initially perform exactly the way you would expect a light bulb to perform, turning them on and off with the wall switch. Next, I simply plugged in the TCP controller bridge into an unused Ethernet port on my router with the supplied Ethernet cable, and plugged the controller bridge into power. Next, I downloaded the TCP Lighting app to my smartphone (there are both Android and iOS versions). Making sure my phone was connected to my home WiFi network, I ran the TCP Lighting app. 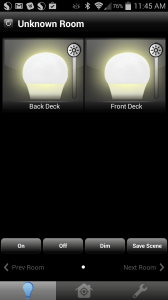 The first time the app is ran it will pop up with a login screen. You initially click past this screen leaving the fields blank. The app then quickly finds the TCP controller bridge and the TCP LED light bulbs.

Next, I was able to name the lights. During the individual light naming process with the bulbs turned on, they will automatically dim to let you easily identify which bulb is which.

The final step was creating an account on the TCP server, right from within the app. It asks for an email address and a password and quickly creates an account. This allows remote control of my TCP lights anywhere I have a data connection literally anywhere in the world.

I installed the TCP Lighting app on another mobile device, and all I had to do to get it to work was to enter my TCP account credentials into the initial app login screen.

The app also includes the ability to schedule the lights to automatically be turned on and off. The bulbs can also be dimmed from within the app.

The TCP A19 LED bulb produces a warm color temperature similar to conventional incandescent bulbs. They also put out about 800 lumens which is close to what a conventional 60 watt bulb produces. They are rated for 25,000 hours of use.

From an external network, the bulbs will respond to on and off and dimming commands with about a half a second delay which is more than acceptable.

Also of course, the wall light switch must be left in the “on” position in order for remote access to function.

So, problem solved at a more reasonable price than either the Phillips Hue kit or 2 Belkin Wemo WiFi wall switches which wouldn’t have worked anyway since I need a 3-in-1 wall switch version.