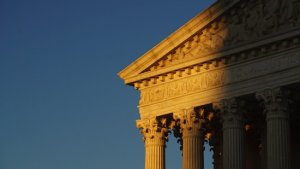 Two Washington-based groups representing Google, Facebook, and other tech giants filed an emergency application with the Supreme Court on Friday, seeking to block a Texas law that bars social media companies from removing posts based on a user’s political ideology, The Washington Post reported.

According to The Washington Post, the Texas law took effect Wednesday after the U.S. Court of Appeals for the 5th Circuit in New Orleans lifted a district court injunction that had barred it. The appeals court action shocked the industry, which has been largely successful in batting back Republican state leaders’ efforts to regulate social media companies’ content-moderation policies.

…On May 13, 2022, NetChoice and CCIA filed an application for an emergency stay with Justice Alito of the Supreme Court. Under Court procedures, Justice Alito may rule unilaterally or refer the matter to the full Court for consideration…

…”We are hopeful the Supreme Court will quickly reverse the Fifth Circuit, and we remain confident that the law will ultimately be struck down as unconstitutional.”

“The Computer & Communications Industry Association jointly filed an emergency brief Friday asking the U.S. Supreme Court for immediate action to prevent an unconstitutional Texas social media law from going into affect. The joint filing, submitted with co-plaintiff NetChoice, asks the Court to reinstate a lower court’s decision blocking the enforcement of the Texas statute while it is being reviewed under the First Amendment…

…CCIA has advocated for free speech online for more than 25 years. This effort has included protecting the First Amendment right for citizens and businesses to exercise both the right to speak and not be compelled to speak online.

The Verge reported that NetChoice had previously won a similar case in Florida last year, making the constitutional issues in this case even more pressing to address.

It is not unheard of for a court to pick a side to support when presented with a case. Personally, I do not have any faith at all in the decision making process of the Supreme Court as it stands today.