Xiaomi might be a recent addition to the USA’s naughty list but this hasn’t stopped the Chinese firm from launching its latest flagship, the Mi 11 5G with an impressive set of specs. The TL;DR version is Snapdragon 888 chipset, 6.8″ screen with 515 ppi, 8GB+128GB/256GB, starting at 749 euros.

The longer version is that Xiaomi has a top-tier phone with specs to take on the best, but it took 25 minutes of global launch presentation to get to the technical details, with the event’s focus on video recording and photography features. Aimed at social media aficionados, this is a lifestyle as much as a flagship device.

(And while Xiaomi were trying to move the conversation away from features, there were plenty of comparisons between the Mi 11 and Apple’s iPhones.)

The Mi 11 is a good-looking smartphone, covered in Corning Gorilla Glass front and back, with curved edges on all sides. The display side has the latest Victus glass giving enhanced drop protection. Two colours were announced at launch, Midnight Gray and Horizon Blue, but more were promised including a future Cloud White model.

The display on the Mi 11 is a 6.8″ WQHD+ display with 3200×1440 pixels giving 515ppi. It’s a 120 Hz AMOLED HDR10+ screen with AdaptiveSync to adjust screen frequency up or down depending on the app’s requirements. Lower frequencies use less power. DisplayMate have awarded the Mi 11’s screen the best smartphone display award along with 13 other accolades. 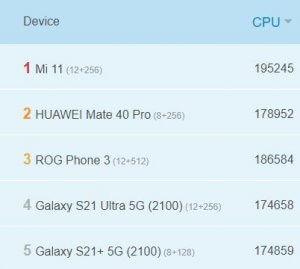 Under the bonnet is the Qualcomm Snapdragon 888 5G. The main octacore CPU is a 5 nm Cortex X-1 supported by new A78 cores and an Adreno 660 GPU, giving an Antutu score of 745,942 and top spot on the leaderboard.

Camera-wise, the Mi 11 comes with 108 MP primary camera with OIS, a 13 MP 123° ultrawide and a 5 MP telemacro lens. Round the front, it’s a 20 MP in-display camera. Xiaomi have worked hard on low light level photography with Night Mode available on all three rear cameras and Ultra Night Video for filming. Videos can be recorded at 4K HDR10+ and there are six AI cinema modes to give films a certain style. Xiaomi has partnered with cinematographer Reynald Gresset to show off the Mi 11’s features and the showreel is impressive.

The phone’s speakers have been tuned by Harmon Kardon and there’s support for two Bluetooth headphones or a pair of speakers. Size-wise, the Mi 11 is 164.3mm x 74.6mm x 8.06mm and weighs in at 196g.

Up to this point, the Mi 11 has shown itself to be a competent flagship contender albeit with nothing particularly special. Interestingly though, the Mi 11 can use the in-display fingerprint monitor as heart-rate sensor.

Out of the box, the Mi 11 will come with MIUI 12 with a major update to 12.5 in Q2. Xiaomi have been listening to users and MIUI 12.5 will allow the user to uninstall pre-installed apps.

Let’s talk pricing….the Mi 11 will be sold in Europe in two versions, one with 128 GB for storage and the other with 256 GB. The main memory is 8 GB in both versions (though a 12 GB version appears to be available in China.)

Exact releases dates for different countries will be announced shortly.

The Mi 11 comes with 2 year warranty plus a 1 year one-time free screen repair, which is a nice touch, and for true fans, a Mi 11 Special Edition will be released later in the year in very limited numbers. Looking forward to seeing that.