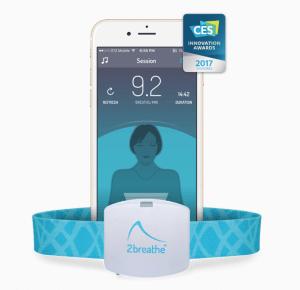 2breathe Technologies is a leading pioneer of digital therapeutic devices. They have announced that their 2breathe Sleep Inducer has been selected as an Innovation Award Honoree in the CES Fitness, Sports, and Biotech product category. The product was showcased at CES Unveiled New York at the Metropolitan Pavilion.

The underlying technology for 2breathe is based on the founders’ first product, RESPeRATE. It was invented by co-founder and CEO of 2breathe, Erez Gavish, and his father, scientist Dr. Benjamin Gavish. When 90% of RESPeRATE users reported an improvement in sleep, they decided to adopt the guided breathing technology onto a smartphone and created the 2breathe Sleep Inducer solution.