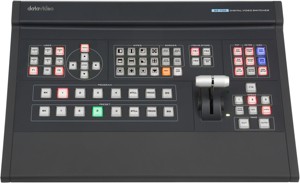 Video switching technology has come a long way over the years. No longer is it necessary to have a giant console full of confusing controls. And even tho much can be accomplished these days using only a computer, some webcams and a software-based switcher, some producers still need a dedicated hardware solution. That’s where the Datavideo SE-700 comes in.

The SE-700 comes with a total of four video inputs, two SDI and two HDMI. There’s one upstream keyer, supporting chroma key and linear/luma key as well as one upstream PIP, supporting chroma key and luma key modes as well as unkeyed mode. For transitions, the SE-700 comes with a wipe generator that contains 32 patterns, including circle and heart with borders and softness control, along with cut and mix options. The unit also features one DSK and a full M/E preview function. The SE-700 also comes with a built-in frame store that has a dedicated stills buffer with up to 24 images stored on an SD Card.

When it comes to configurable outputs, the SE-700 is loaded with options. Each SDI output can be switched in the menu as: Program (w/ DSK), clean program (w/o DSK), clean preview (w/o DSK), multiscreen or input 1-4.

And if that’s not enough, this switcher also has XPT (Cross Point Assignment), an on-screen menu system for easy access to parameters, both tally and GPI outputs and the SE-700 even has additional control options that can be accessed from a tablet or computer.