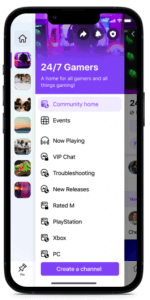 Meta (parent company of Facebook and Instagram) announced that they are testing new ways to quickly access your favorite Facebook Groups and to simplify how they are organized. Meta also introduced channels, which are focused spaces for people to connect in smaller, more casual settings with their communities.

Here are some of the features that Meta is adding to Facebook Groups:

Meta is testing a new sidebar that helps you easily find your favorite groups more quickly. It will list your groups and the latest activity within them, like posts or chats you haven’t seen yet. You can also pin your favorite groups so they show up first, discover new groups, or create your own group.

Within your group, you’ll see a new menu that includes things like events, shops and a variety of channels to make it easier to connect with others around the topics you care about.

Admins can create channels to connect with their groups in smaller, more casual settings where they can have deeper discussions on common interests or organize their communities around topics in different formats.

Community chat channels: a place for people to message, collaborate and form deeper relationships around topics in a more real-time way across both Facebook Groups and Messenger.

Community audio channels: a feature where admins and members can casually jump in and out of audio conversations in real time.

The Verge reported that the changes made by Meta to Facebook Groups looks a lot like Discord. It has a left-aligned sidebar and channels list for Groups. According to The Verge, the changes are giving off “some serious Discord vibes.” The change has a lot of purple color added to it, which evokes Discord’s look.

The Verge also pointed out that part of the new Facebook Groups includes text chats, audio rooms, and feed rooms where people can post and comment. Again, it looks a lot like Discord. Meta included images that show what Facebook Groups will look like. It just so happens to have focused on a group that is for gamers, perhaps to boost Facebook gaming.

It isn’t unheard of for social media companies to copy features that originated somewhere else. Many of them have a tendency to “copy” another social media’s “homework”, rather than creating something unique on their own platform. Personally,

In short, Meta decided to take the lazy way out and copy-paste the features it saw in Discord. It is unclear what, exactly, Meta hopes will happen next. I suppose it is possible for Discord to object to having their main features appropriated by Meta. Personally, I doubt that people will leave Discord, where their game-playing friends are at – in favor of using Meta instead.