OnePlus have announced a new smartphone special edition and it’s a Nord 2 x PAC-MAN. Waka-waka-waka….Partnering with Bandai Namco, the upcoming Nord 2 will be heavily customised with PAC-MAN themed goodness to celebrate over 40 years of the yellow dot gobbler which first appeared in Japanese arcades way back in 1980. 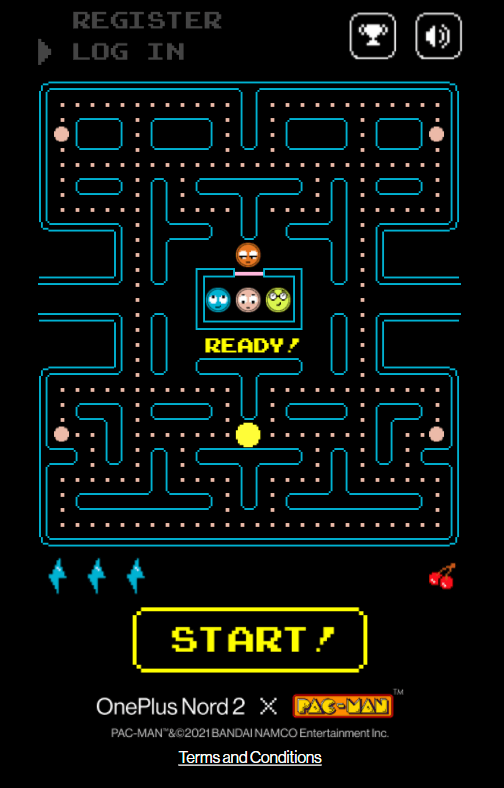 The Nord 2 x PAC-MAN special edition is customised both inside and out. Round the back, there’s a dual-layer rear cover with the classic PAC-MAN maze on top and a glow-in-the-dark background on the bottom. Yes, this Nord 2 glows in the dark (but regrettably, there doesn’t seem to be a picture of the phone yet). Inside the phone, the OxgenOS UI has been tweaked with PAC-MAN references, and extra features such as games and challenges have been added too. There’s exclusive and hidden PAC-MAN content which will need to be unlocked to see it all.

And if that’s whetted your interest, there’s a chance to win a OnePlus Nord 2 x PAC-MAN Edition of your own with some arcade action. Head to https://pac-man.oneplus.com and play PAC-MAN. It’s got the tunes and the waka-waka-waka but Blinky, Pinky, Inky and Clyde aren’t quite the ghosts they once were.

Still, get a high enough score and you’ll be in with a chance of winning the new phone. OnePlus are giving away three phones along with a free pair of OnePlus Buds Z. Get gobbling – the contest for the phones runs from Monday 8 November to Wednesday 10 November. There are more details on the contest here and it’s only open to residents of Europe or India.