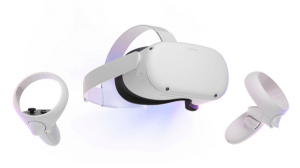 With Quest 2, we’re taking things even further, starting with a multi-generational leap in processing power with the state-of-the-art Qualcomm Snapdragon XR2 Platform offering higher AI capability, and 6GB of RAM. The new display features 1832 x 1920 pixels per eye – our highest resolution display yet. With 50% more pixels than the original Quest, everything from multiplayer games and productivity apps to 360° videos look better than ever.

The Oculus website posted more information about some of the games that will be available on Quest 2. Here are a few of them:

Star Wars: Tales From the Galaxy’s Edge will allow players to explore the wilds of Batuu and the outskirts of Black Spire Outpost, the famed setting of Star Wars: Galaxy’s Edge (at Disneyland and Disney World). This game will launch “this holiday season” on the Quest Platform.

Medal of Honor: Above And Beyond will have players storm the beaches of Normandy, aid the French Resistance, and liberate Europe. This game will be released on December 11, 2020, on both the Rift Platform and on Quest via Occulus Link (comparable PC also required). It also will be released on Steam.

MYST (from 1993) will be coming to the Quest Platform “later this year”. Built from the ground up for VR, this reimagined version of the classic puzzle game features updated art and interactions – and even an optional puzzle randomizer, for those who long ago memorized the island’s secrets and are looking for a fresh take on their Myst experience from 1993.

Overall, it sounds like people who love to play video games will have plenty of options this holiday season. It remains to be seen what gets the most sales – Quest 2, PlayStation PS5, or Microsoft’s Xbox Series S. I suspect that most people will not have the money to buy all of them at once.