OnePlus have announced the launch events for the upcoming OnePlus 7T smartphone. Starting in India and the US on 26 September, it will culminate with the European launch on 10 October in London at 16.00 BST.

As usual, OnePlus will be selling tickets to the event, which will be at the brand new Magazine London venue in North Greenwich. The tix go on-sale from 20th September via OnePlus.com. 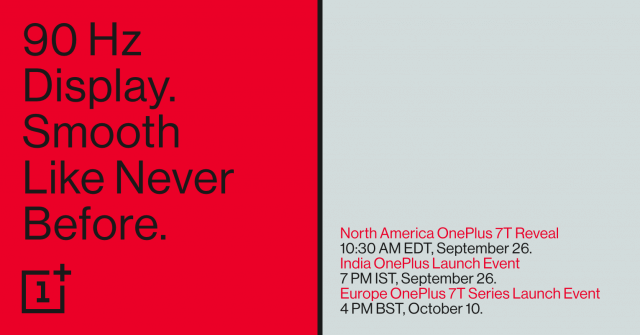 Pete Lau, CEO and founder of OnePlus said, “OnePlus has been built around the idea of fast and smooth, and we constantly challenge ourselves to be even better. Your smartphone’s display is the element you interact with the most, so it makes sense to invest in screen innovation. I’m really excited to hear what our users think of the OnePlus 7T Series.”

Going with OnePlus’ normal behaviour, the 7T is expected to be an incremental upgrade, rather than an entirely new model. The invite confirms that the 7T will come with a 90 Hz display but you never know what else might appear – the press release promises “more to come in London”. Apparently OnePlus are launching a magazine too, called “Addition”. Interesting.

If you can’t be there in person, the launch event will be streamed live via the OnePlus official website or on its YouTube and Twitter accounts.