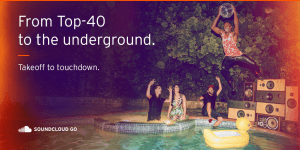 Music streaming has become a big deal with many major players like Google, Apple and Amazon in the game. However, the biggest player in the game these days seems to be Spotify, but it’s tough competition in a crowded market.

Now SoundCloud is trying impinge on its territory and it announces availability in both the UK and Ireland. The name may not be as familiar, but the streaming service is becoming a major player in this market.

This is a bit different, as it features up and coming unsigned artists as opposed to established acts. However, there are 125 million tracks available.Don’t worry though, there are top 40 songs as well.

“And just like in the US, we are sharing part of that advertising revenue with a growing number of creators. When you hear an ad, artists get paid”, the service claims.