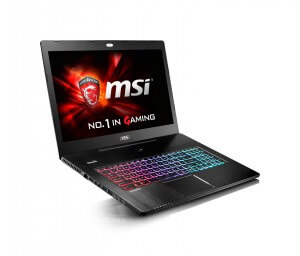 When it comes to computer gaming, the standard thinking is that you’ve got to have a massive, overpowered desktop system if you really want to be able to play. After all, modern games are chock full of high-resolution audio and graphics files that require a lot of horsepower in order to be properly rendered. And while most of the low-end laptops you’re likely to find at the local office supply store won’t really excel when it comes to gaming, companies like MSI are hard at work developing gaming systems that are as powerful as they are portable.

At CES 2016, MSI introduced its new GS72 Stealth Pro laptop, the successor to its popular GS70. Measuring in at 0.78” thin, the GS72 is MSI’s slimmest and lightest 17” gaming notebook and sports an ultra-high resolution 4K display  in a form factor chassis. There is also a non-4K GS72 Stealth option. Both versions of the computer are expected to be on the market in early 2016.

Some specs from one potential build of the Stealth GS72: