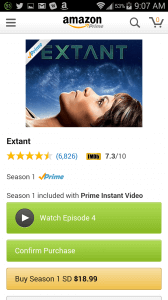 However, there is a bit of a catch. Rather than making the Amazon Prime Instant Video Player available in the Google Play Store, it is available only via Amazon Android Apps, which are now part of the regular Amazon Store app that you probably already have installed. Update — it is also available ONLY for Android phones and NOT Android tablets.

To download the Amazon Prime Instant Video Player, it is necessary to go into the Android security settings and temporarily enable installation of apps from “Both Trusted and Unknown Sources” – a.ka. non-Google Play Store sources.

After you have downloaded the app, go back into the Android settings and remove the checkmark from the “Both Trusted and Unknown Sources” in order to lock the phone back down to apps installed from the Google Play Store only.

Once installed the Amazon Prime Instant Video Player for Android seems to work flawlessly. It was able to pick up my user name and password directly from the existing Amazon app.

Until now Android has been lacking an Amazon Prime Video playback app, even though it has been available for iOS for quite some time.

The last streaming video reason to keep an iOS device around has just been removed. Netflix and Hulu Plus have had Android players for a long time. Now with the addition of Amazon Prime Videos the big three video streamers are now all available via Android phones. The next step is to make the videos playable on regular Android tablets.