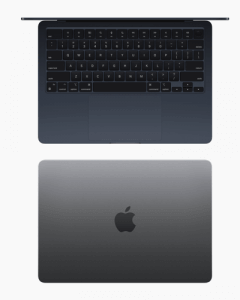 The new MacBook Air starts at $1199 and will be available next month.

Redesigned around the next-generation M2 chip, MacBook Air is strikingly thin and brings exceptional speed and power efficiency within its durable all-aluminum enclosure. It’s the ultrafast, ultracapable laptop that lets you work, player create just about anything – anywhere. It weighs 2.7 points and is 0.44” thin.

The MacBook Air comes infer gorgeous finishes – each with its own matching MagSafe charging cable. Finishes include Midnight, Starlight, Space Grey, and Silver.

Apple points out that thanks to the efficiency of the M2 chip, MacBook Air can deliver amazing performance without a fan – so it stays completely silent no matter how intense the task. Apple claims that the MacBook Air is as responsible as it is durable, featuring 100 percent recycled aluminum in its compact enclosure. A footnote explains: “Recycled material claim applies to the enclosure and is based on auditing done by UL LLC.”

The M2 chip starts the next generation of Apple silicon, with even more of the speed and power efficiency of M1. So you can get more done faster, without a more powerful 8-core CPU. Create captivating images and animations with up to a 10-core GPU. Work with more streams of 4K and 8K ProRes video with the high-performance media engine. And keep working – or playing – all day and into the night with up to 18 hours of battery life.

All your go-to apps run lightning fast in macOS – including Microsoft 365 and many of your favorite iOS apps. And with over 10,000 apps and plug-ins optimized for Apple silicon, your creative future is wide open.

The new MacBook Air lets you make and receive iPhone calls on your Mac. Use your iPad as a second display. Unlock your Mac with your Apple Watch. It’s like they were all made for each other, because they were, Apple says.

Apple silicon and MacOS bring advanced built-in security to help defend against malware and viruses. And Mac is designed to give you the freedom to choose what you share and how you share it.

The breathtaking 13.6-inch Liquid Retina display is the biggest – and brightest – ever on MacBook Air, with support for 1 billion colors. Text is supercrisp, and photos and movies more brilliant and vivid, with rich contrast and sharp detail.

It also has a 1080p FaceTime HD camera that doubles the resolution and low-light performance of the previous generation. Calls come through sound and clear wherever you are thanks to the three-mic array with advanced beam forming algorithms to capture clean audio.

Immerse yourself in movies and music with improved stereo separation and vocal clarity from two tweeters and two ultra thin woofers. Spatial Audio with support for Dolby Atmos places sound all around you.