In a pandemic-driven AR showcase, the new Nord smartphone arrived and returned OnePlus to the mid-range market with a phone sporting 5G, 90 Hz screen, 128 GB storage, dual selfie cameras and a very competitive price of GB£379. Let’s take a look and see what’s on offer for half the price of the 8 Pro. 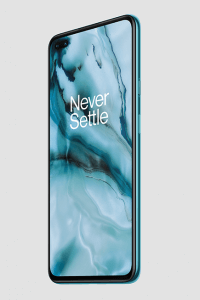 As expected, the Nord is powered by the Qualcomm Snapdragon 765G 5G chipset, driving a 6.44″ 90 Hz Fluid AMOLED screen with 2400×1080 pixels giving 408ppi. That’s going to look pretty sweet and there’s no curve on the edge of the screen – I’m already a fan.

The cameras are always of interest and the Nord has one big trick up its sleeve. Starting round the back, the phone features the same 48 MP Sony IMX586 sensor as the flagship OnePlus 8, complete with a large f/1.75 aperture for bright images, and optical image stabilization (OIS) to reduce blur and shake. In addition, Nord comes with an 8 MP ultra-wide angle camera, a macro camera and a depth sensor.

However, it’s round the front where the surprise is. The Nord is the first OnePlus device to come with a dual front camera setup for super selfies. Featuring a 32 MP main camera, the highest resolution front camera on any OnePlus phone, the OnePlus Nord is going to get some great selfies. The main front camera also supports high-quality video capture at 4K up to 60 fps. The second 8 MP ultra-wide angle front camera offers a 105-degree field of view for fantastic group shots. With an ultra-wide angle on both the front and the back of the camera, a whole new way of taking photographs is going to open up to Nord owners.

The Nord is 158 x 73 x 8 mm and weighs in at 184 g, which makes it a 2 mm shorter but 4 g heavier than the standard OnePlus 8. The new phone brings plenty of design cues over from the older siblings and shares technology too. The Nord comes with  Warp Charge 30T, which will take its 4115 mAh battery from empty to 70% in only half an hour. As with the 8 and 8 Pro, Nord learns your life patterns to reduce the amount of time the battery spends at 100% on charge to enhance battery health. 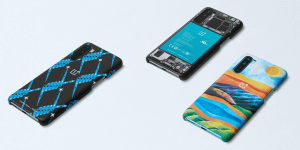 To brighten up the Nord, OnePlus are offering some funky cases to protect your investment, including one that has (pretend) X-ray vision, showing off the internals of the phone.

“The OnePlus Nord is an important milestone for OnePlus, as we always look for new ways to share the best technology with more people around the world. We are excited to finally bring a more accessible OnePlus smartphone that confidently stands alongside other products in the OnePlus family,” said Pete Lau, Founder and CEO of OnePlus. “The OnePlus Nord combines a flagship camera along with our signature features such as the 90 Hz Fluid Display, OxygenOS, and Warp Charge 30T to deliver a best-in-class smartphone experience.”

General availability from 4th August in the UK and rest of Europe but if you can’t wait, there are pop-up stores online and John Lewis on 31st July. Disappointment for cousins across the pond who will be restricted to a limited launch in the US of A.

Regrettably I wasn’t able to get hands-on with the OnePlus Nord, but it still looks like an exciting phone. The OnePlus 8 and 8 Pro are fantastic phones but even I balk at spending the best part of £1000 on a phone. While I might stretch to the 8 on a generous day, this very much looks like a phone I’d consider buying.

As for the much heralded AR launch, it was a complete fail for me. The OnePlus Nord AR app would recognise a surface but no amount of tapping made the stage appear. Unimpressed and uninstalled.