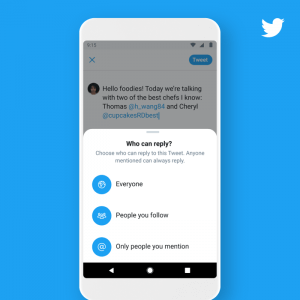 Before you Tweet, you’ll be able to choose who can reply with three options: everyone (standard Twitter, the default setting), only people you follow, or only people you mention. Tweets with the latter two settings will be labeled and the reply icon will be grayed out so that it’s clear for people if they can’t reply. People who can’t reply will still be able to view, Retweet, Retweet with Comment, and like these Tweets.

The Twitter announcement of this new feature was written by Director of Product Management Suzanne Xie. She wrote: Twitter is where you go to see and talk about what’s happening. But sometimes, unwanted replies make it hard to have meaningful conversations. (Ahem, reply guys.)

I think she brings up a very good point. There are many of us on Twitter who mostly use the platform to talk to our friends. Nobody wants some random person to jump into that conversation with a mean comment in an attempt to derail the conversation or to start an argument. Those people make Twitter an unpleasant place to be. It sounds like Twitter’s new feature – after it rolls out completely – will make it impossible for reply guys to hassle people in the way that they do now.

Another interesting thing about this is that it has the potential to limit the spread of the garbage posted by trollbots. Right now, the only thing people can do is block and report trollbots, and hope Twitter removes them. The new feature would function as a filter that prevents trollbots from spreading misinformation, conspiracy theories, and other nonsense in the way that they do now.

One thought on “Twitter is Testing New Conversation Settings”