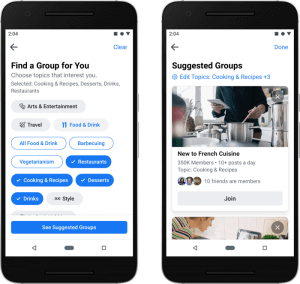 At F8 2019, Mark Zuckerberg and other Facebook executives repeated a version of the phrase “the future is private”. Personally, that particular phrase is not one I would expect to hear from Facebook, given their multitude of privacy issues that somehow seem to keep happening.

Facebook Newsroom has information about some upcoming “privacy-focused” changes to Facebook’s products.

Mark Zuckerberg opened the two-day event with a keynote on how we’re building a more privacy-focused social platform – giving people spaces where they can express themselves freely and feel connected to the people and communities that matter most. He shared how this is a fundamental shift in how we build products and run our company.

Here are some key points:

Messenger will have a “dedicated space where you can discover Stories and messages with your closest friends and family.” Users will be able to choose exactly who sees what they post. This sounds good!

Messenger will also have something that makes “it even easier for businesses to connect with potential customers by adding lead generation templates to Ad Manager.” It will allow business to make ads with a “simple Q&A” that allows the business to learn more about their customers. This does not sound like it is privacy-focused.

WhatsApp is getting a Business Catalog that allows users to chat with businesses and for businesses to showcase their goods. This doesn’t sound privacy-focused.

Facebook is putting Groups first by making it easier for people to find Groups and participate in them. Some of the other changes sound to me like Facebook wants to make Groups more like what Discord already offers. If I remember correctly, there were some politically motivated shenanigans happening in Groups before the 2016 election. I expect the updated Groups will be manipulated the same way.

Facebook Dating is going to have a feature called “Secret Crush”. Users can add up to nine friends that they want to express interest in. Those friends will get a notification saying someone has a crush on them. If a user’s crush adds them to their Secret Crush list – they make a match and it appears both will be notified of that. Is this really privacy-focused if Facebook still has all the data? What if that leaks?

Instagram is getting features that appear to be primarily designed to make it easier for creators to sell products to other Instagram users. Not sure why this is considered privacy-focused by Facebook. To me, this sounds like its more about sales than privacy.

Fancy new features can make Facebook’s products more interesting (at least, for a little while). But, it’s one thing to say that the company will be privacy-focused, and quite another to actually take actions that truly do improve the privacy of users – and their data. Will Facebook make significant, meaningful, changes? Or is this just a bunch of hype?