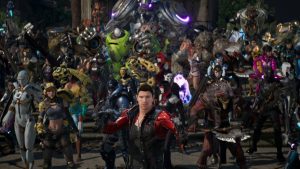 Epic Games has released $12,000,000 worth of content from Paragon, Epic’s high-end action MOBA, for free to all Unreal Engine 4 developers. These assets, built at a cost of over $12,000,000, encompass 20 triple-A characters and over 1,500 environment components from Paragon.

The content is now available free of charge in the Unreal Engine Marketplace, where developers may download Paragon packs to use in their UE4 projects. It includes 20 AAA quality characters, with their respective skins, animations, VFX and dialogue, along with over 1,500 environments from Paragon.

Characters: 20 Paragon Hero characters will initially be available including all skins for distinct character variants. The release also includes base meshes, thousands of textures, VFX and animation cycles, and dialogue with hundreds of sound cues. The character Shinbi comes with an animation Blueprint which can be tailored to specific needs.

Environments: The Paragon release includes over 15,000 environment assets created for the Agora and Monolith maps, including a sample map for developers to use and customize as desired.

More to Come: Epic will release millions of dollars worth of additional Paragon asset packs beyond the $12 million offering through spring and summer of 2018.