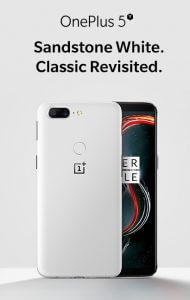 In not-entirely-unexpected news, OnePlus has announced that the 5T will be available in Sandstone White. Teased by Carl Pei and harking back to the original OnePlus One, the new colour will be available from 10:00 GMT on Tuesday 9th January for a limited period. 10 am ET for those across the pond.

The phone won’t be completely white, though, with the volume slider picked out in red, as previously seen on the Star Wars limited edition. From the announcement and the options in the OnePlus store, it seems that this limited edition will only be available as a “top of the range” model with the 8GB / 128GB configuration. In all other technical respects the Sandstone White version is the same as the Midnight Black.

There’s no limited edition premium so it’s priced at GB£499 / US $559 which is good value whatever the colour. Form an orderly queue now….