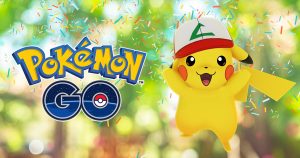 Niantic is officially celebrating the one year birthday of Pokémon Go. According to Niantic, players caught over 125 billion Pokémon since the game was launched.

While many players are focusing on the Raid Battles, or the upcoming Pokémon events that will take place in several countries as the year goes on, Niantic quietly added something else to the one year anniversary celebration.

Starting on July 6, 2017, and continuing through July 24, 2017, players have the opportunity to catch a Pikachu that is wearing a familiar hat. During that timeframe, Pikachu discovered in the wild will be wearing Ash’s famous hat from the Pokémon animated series. In addition, players will be able to stock up for Raid Battles with the special limited-time Anniversary Box, which will include Incubators, Max Revives, Ultra Balls, and Raid Passes at a discount in the in-game shop.

The newly added Raid Battle feature is live. Niantic put together a detailed set of instructions about Raid Battles for those who have questions about how to do that. At the top of that article, there is a link to known issues that some players are experiencing with Gyms and Raid Battles.