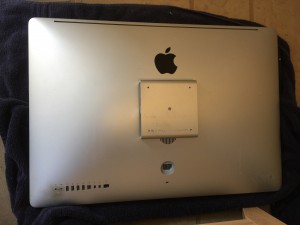 There’s probably little point in calling Apple out over a four-year old computer. But I think if my experience with the mid-2011 27″ iMac is any indication, these machines are lemons.

I’ve blogged here before about Jen’s mid-2011 27″ iMac, and how the video card failed two months short of a special extended warranty period Apple had put in place specially for this problem. But I haven’t elaborated yet on the history of my own iMac, which is the exact same model.

I purchased the all-in-one computer in November of 2011. It worked just fine up until January of 2014. I took the computer into a local Mac repair shop and there it was determined that the video card had gone bad. The shop was able to replace the card at no cost to me, because of the special warranty I mentioned above. After that repair, the iMac was working fine, up until about two weeks ago. Then, out of nowhere, I was struck by a surprise system crash. Rebooting would fix the machine temporarily, but after a few minutes, it’d crash again. The way the machine went down looked very similar to what happened when my iMac’s video card failed the first time. Having seen this type of crash before, not only with this iMac but also with Jen’s, I was pretty sure that the video card had failed again. Another trip to the Mac repair shop confirmed this. Fortunately, this failure occurred just inside the expiration date of the special extended warranty. So, at least the repair will be free of charge.

A friend of mine also has a mid-2011 27″ iMac that’s currently collecting dust in a storage shed. That iMac crashed in a way that sounds very similar to mine. Instead of messing with a repair, he just bought a new computer. Between me, my friend, and Jen, we’ve had three iMacs, all the same model, go down for the same reason. That’s a 100% failure rate in our (admittedly) small group. But we can’t be the only ones who’ve suffered with the problematic make of this particular iMac.

I think it’s safe to say that the mid-2011 27″ iMac is a lemon. If you’re using one of these machines and it hasn’t failed yet, consider yourself lucky. But prepare now for the inevitable loss of your computer. And if you’re considering buying one of these computers on eBay or Craigslist, take a pass. While they’re still very robust and competent machines, they will likely break before you know it, leaving you with an expensive doorstop.