Over the past year, I’ve noticed more and more people wearing activity tracking devices and here in Northern Ireland I tend to see Fitbits rather than anything else.  Fitbit has been advertising on TV lately too with “It’s All Fit” and I’m sure that there will be a good number of Zips, Flexes and Charges under the Christmas tree come 25th December. I’ve worn a Zip for nearly two years as part of my efforts to keep my weight down and on review today I have the next model up, the Fitbit Flex. Let’s take a look. 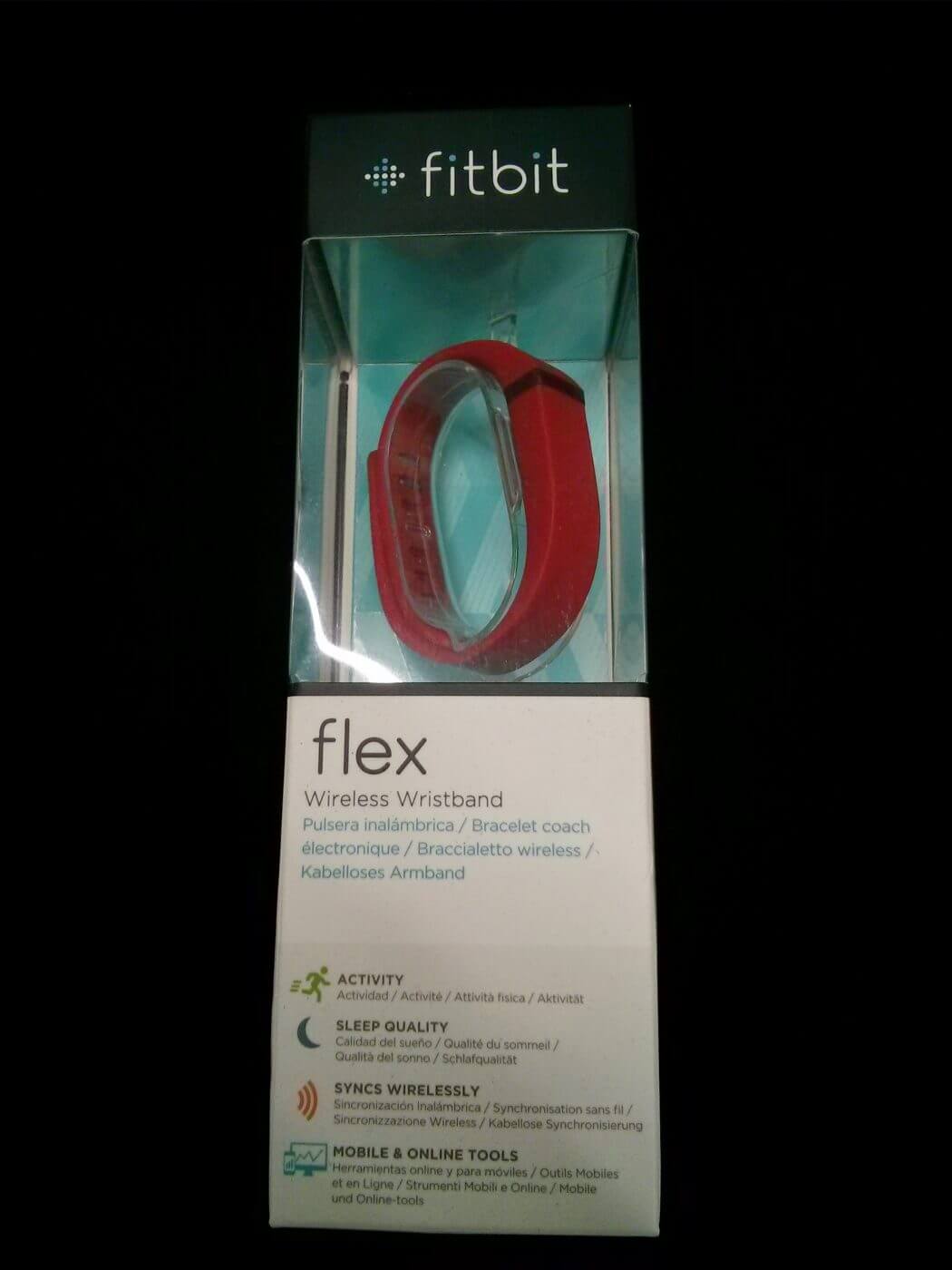 The Fitbit Flex comes in a neat transparent package that shows off the coloured wristband and opening the packaging reveals the fitness tracker itself, large and small wrist bands, a USB sync dongle and a USB charging dock. 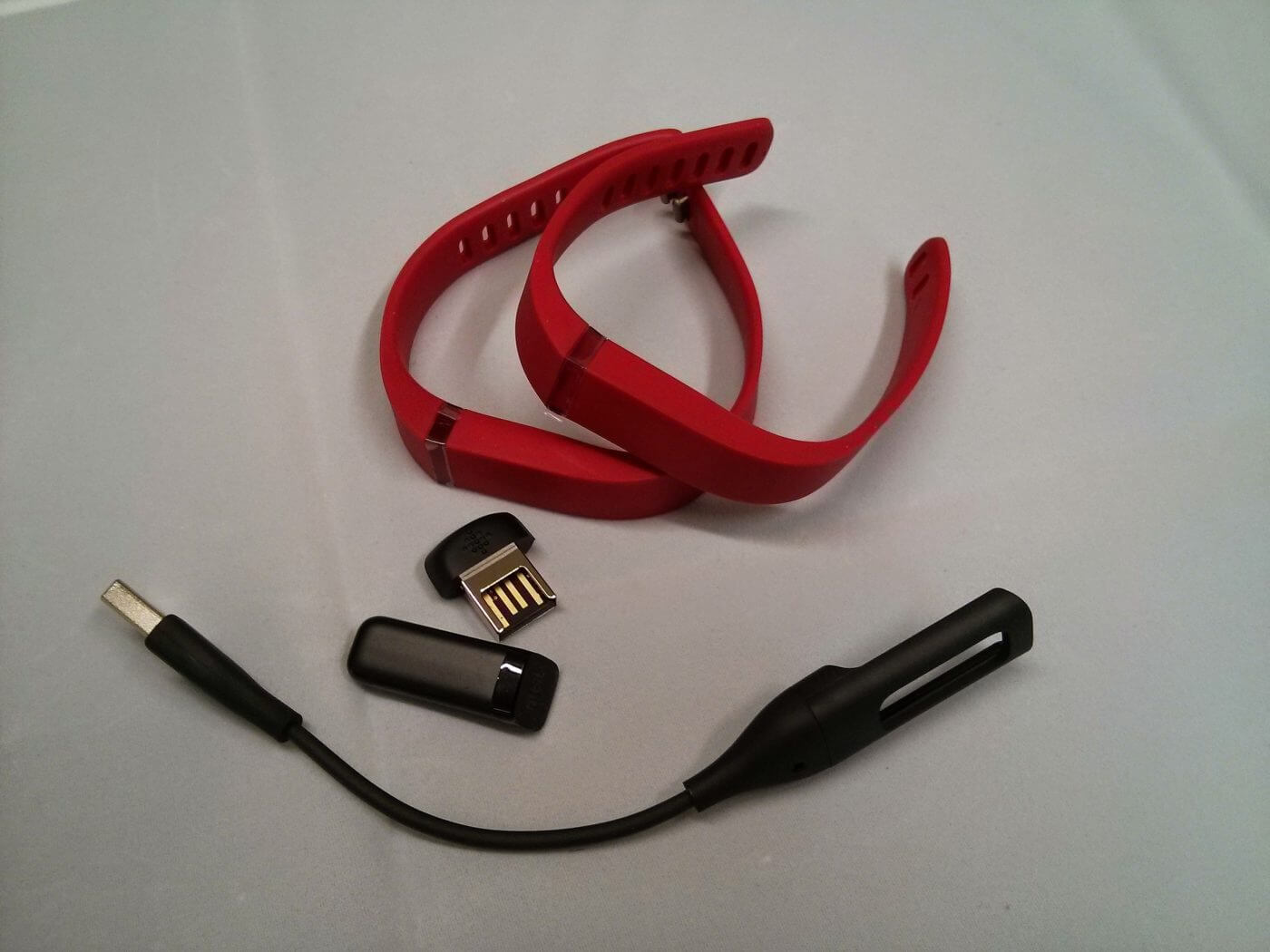 The fitness tracker itself is the small black rectangular unit and it’s slipped inside a small pocket in the wristband to be worn both during the day and asleep at night. The wristbands are made of a soft plastic and are available in ten different colours with additional coloured bands on sale from Fitbit’s online store. The large size fitted me well and the smaller one will suit women and children. It’s not obvious in the pictures, but the Flex uses a push-through buckle to keep the band on. It’s a little tricky to get clicked in sometimes, but it keeps the wristband on and in the two weeks of testing I’ve not had any problems with the Flex falling off accidentally. The Flex is supposed to be water resistant to 10m (30ft) and while I didn’t go that deep, it did survive 1000m of surface swimming.

The tracker has a set of LEDs which show through the transparent plastic window on the wrist band. The user interface is simple with five round LEDs used to communicate with the owner and at a basic level, each dot represents a fifth of the way towards the daily target. For example, if the target is 10,000 steps, one LED is worth 2,000 steps. The picture below shows the tracker has measured 6,000 steps, give or take. Normally none of the lights are on but tap on the band at the tracker and the lights come on. 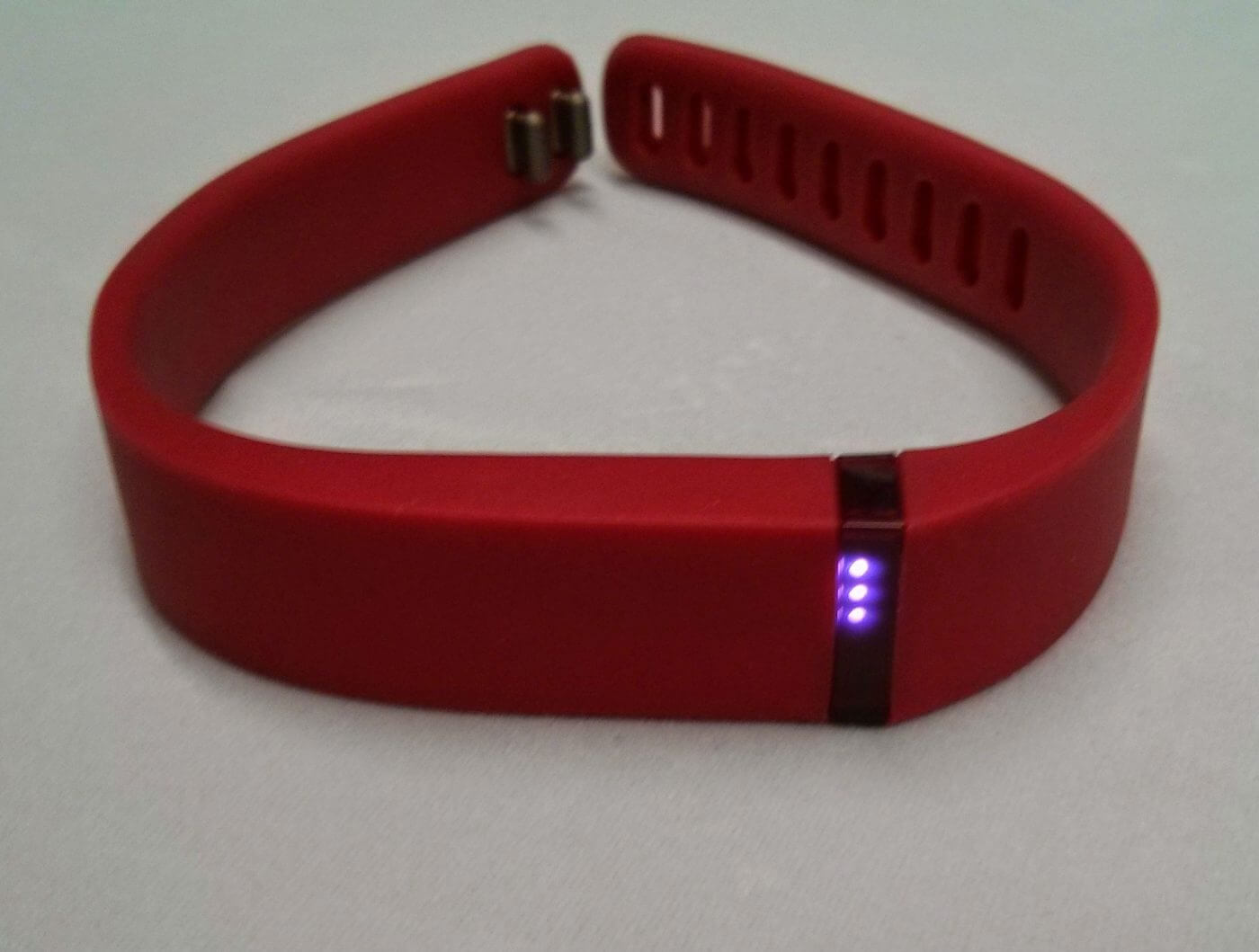 The Flex has an internal rechargeable battery which lasts about 5 days between charges. To charge the Flex up, the tracker unit is taken out of the wristband and placed in the USB charging cradle which in turn is plugged into any available USB port. Charging is relatively quick, typically taking less than an hour.

Getting the activity data off the Flex is easy too, with syncing available between the Flex and both PCs and smartphones. Fitbit is agnostic with clients available for Windows, Macs, Android and iOS, though check compatibility to be sure as the phone or tablet has to support the Low Energy (LE) version of Bluetooth. Syncing with a desktop or laptop is a case of downloading and installing the app, sticking the USB dongle in and getting going. The dongle and Flex are pre-paired so there’s nothing to worry about there. Sync to a phone is similar – download the app from the relevant store and run it. The app will automatically search for the Flex and connect up. A Fitbit login is needed from fitbit.com and signing up for that is free. There’s a full lifestyle portal online which gives access to fitness stats from any web browser.

Personally I used my Flex almost exclusively with my Android phone (Nexus 4) and tablet (Nexus 9). The app shows daily activity, sleep patterns and can record exercise, weight, food and water if the information is added in conscientiously. 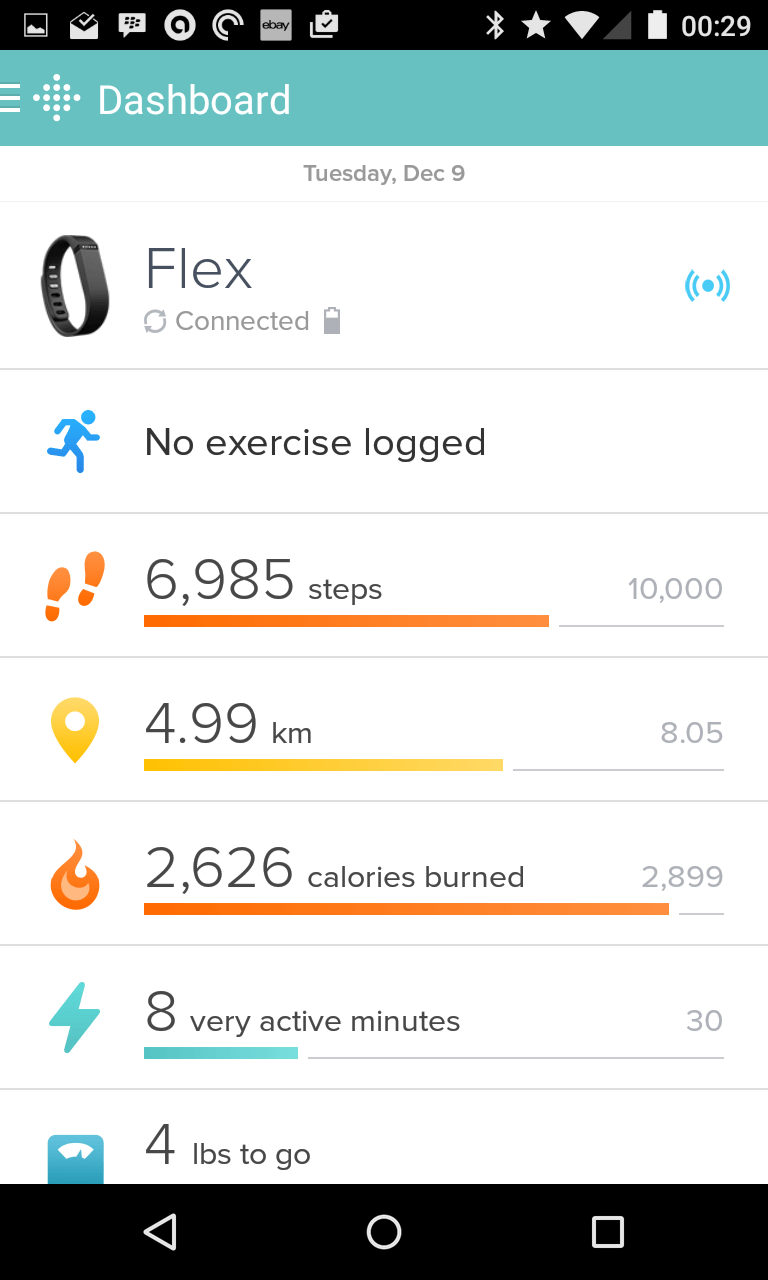 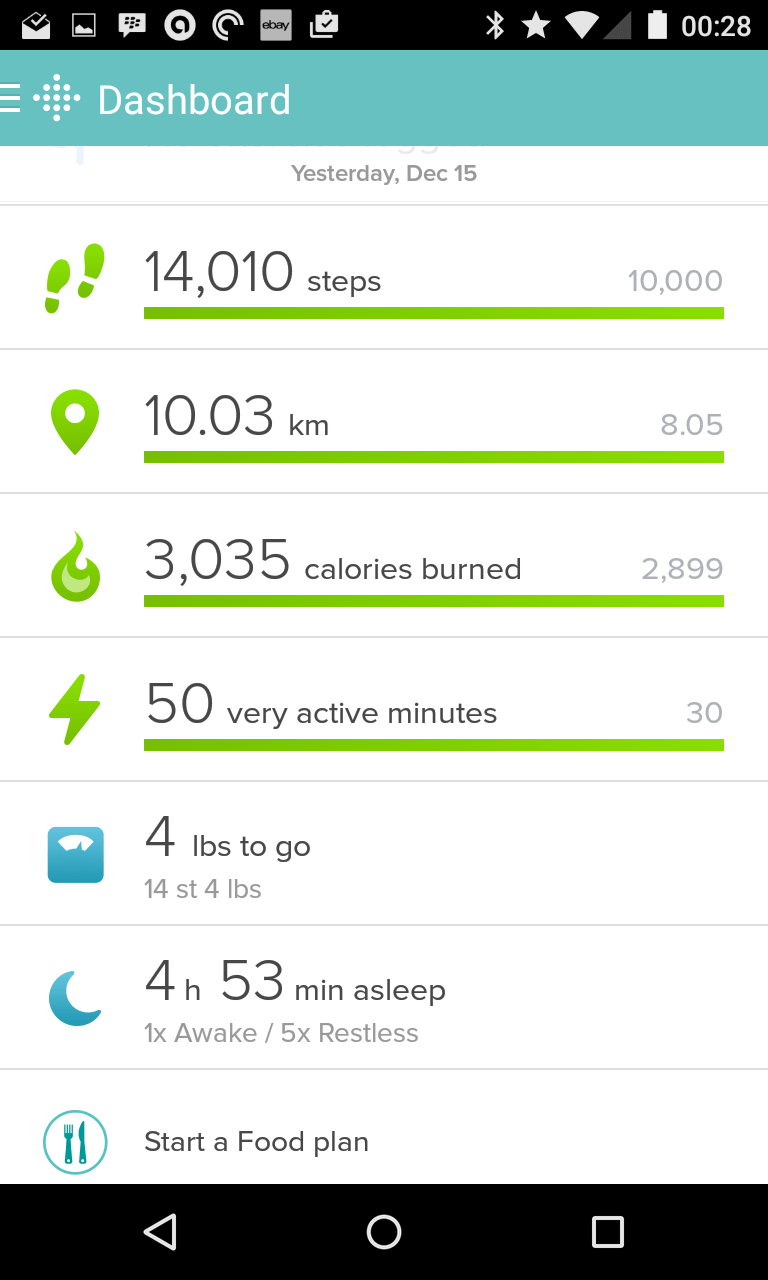 Different views of the data can be shown – on the left below is a weekly view. Contrary to indications, I didn’t spend Saturday lounging in front of the TV, but forgot to put the Flex on! The Flex can also track sleep patterns, though it can’t automatically detect sleep and needs the wearer to indicate the approximate time of going to bed and getting up. 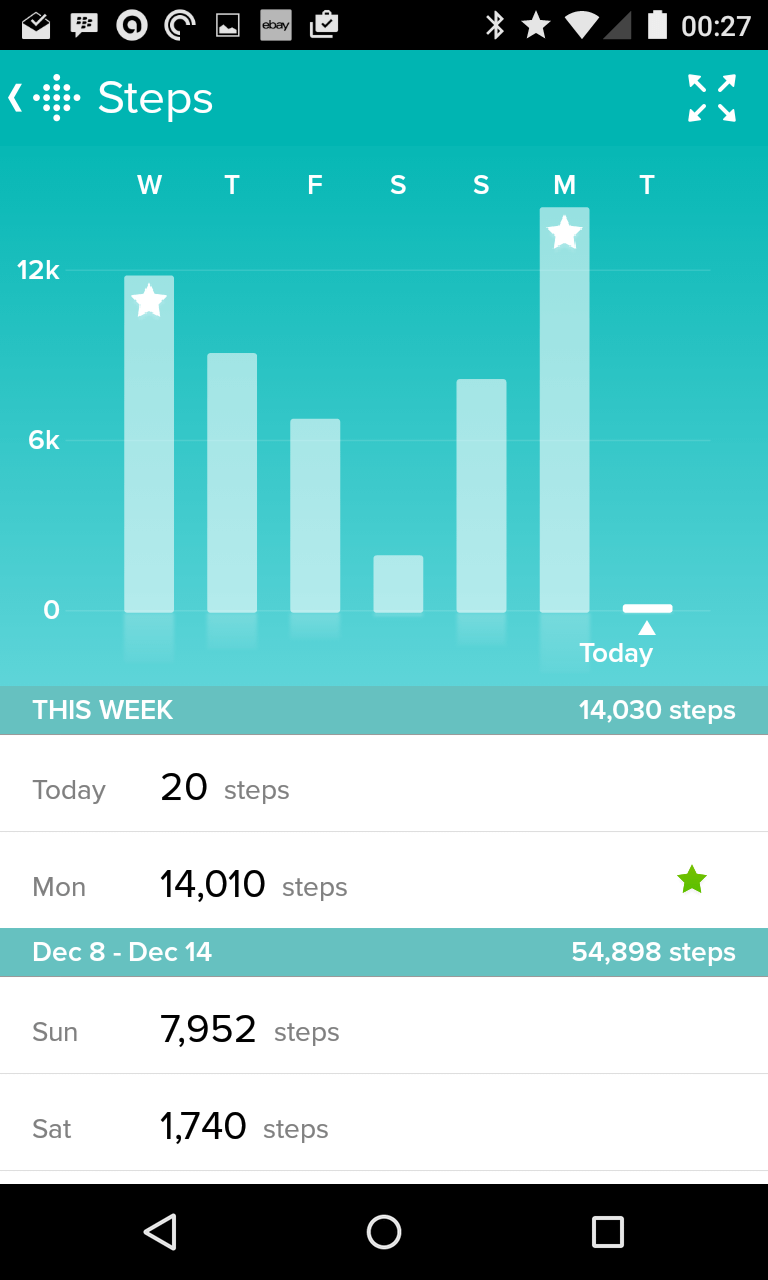 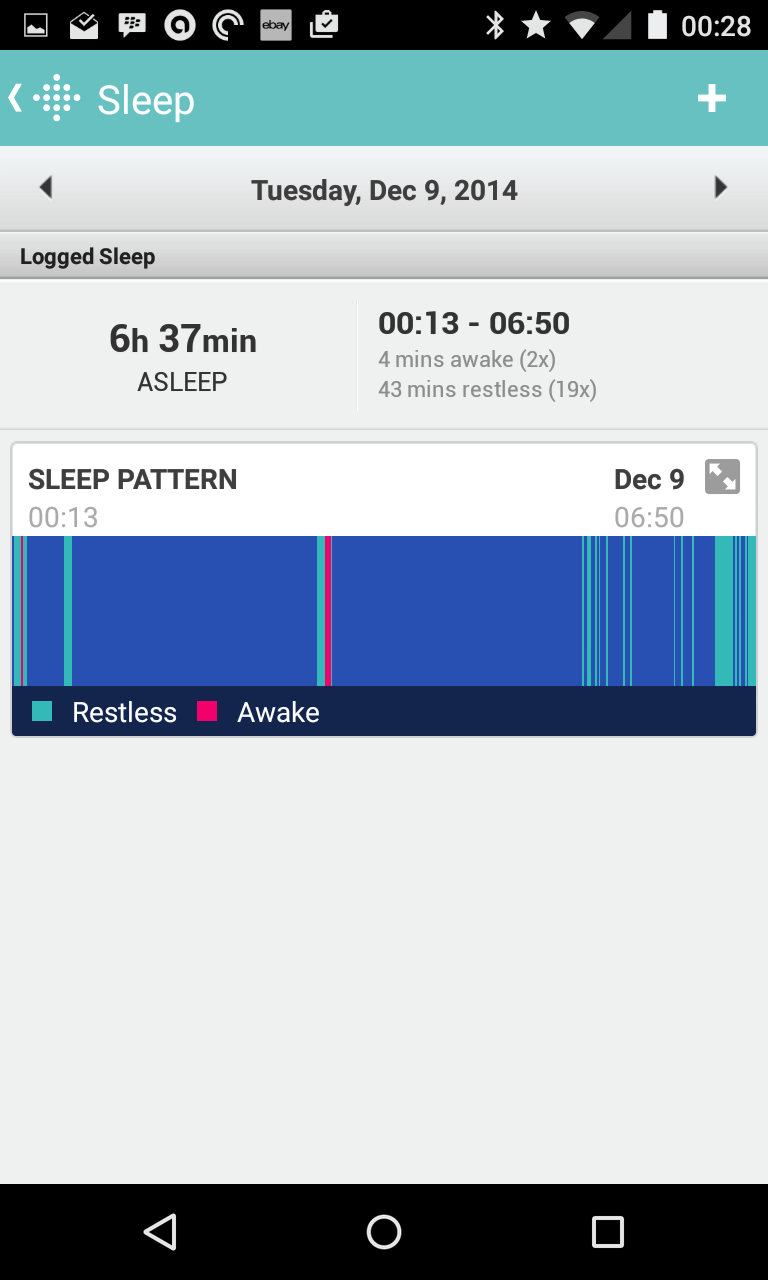 The Flex unit can vibrate too and vibration is used to give feedback to the wearer on attaining goals. It can be used as an alarm as well and although I wasn’t really keen on wearing the Flex in bed, the wake-up alarm worked well for me, prodding me to stir when I’d turned my other alarm off. I don’t normally wear a watch in bed so I did find wearing the Flex at night a little odd but that’s very much a personal feeling.

In the two weeks I used the Flex, I didn’t come across any other problems bar one time that the unit needed reset. I’m not sure what happened: I think I might have tried to sync with the Flex from both phone and the tablet at the same time but resetting the Flex was simple using the normal paperclip-in-reset-hole and no activity data was lost.

I came to this review as a Fitbit Zip wearer and to start with, I did think that the Flex was a little bit of a backward step as I couldn’t see the number of paces that I’d taken – the Zip shows this information on a small LCD screen.  However, over the course of the trial, I’ve got used to it and if I really want to know, I can do a quick sync with my phone to get the data. The Flex is much better than the Zip when it comes to wearing during activity and doesn’t get accidentally pulled off or left in the locker on trousers. The water resistance of the Flex is a bonus too. One downside is that the Flex doesn’t tell the time, so it can’t replace a wristwatch. For many people this isn’t an issue as they don’t wear a watch but for those who do, the Fitbit Charge is perhaps the answer.

The Fitbit Flex is priced at £79.99 RRP but can be found a little cheaper on-line.

Thanks to Fitbit for providing the Flex for review.