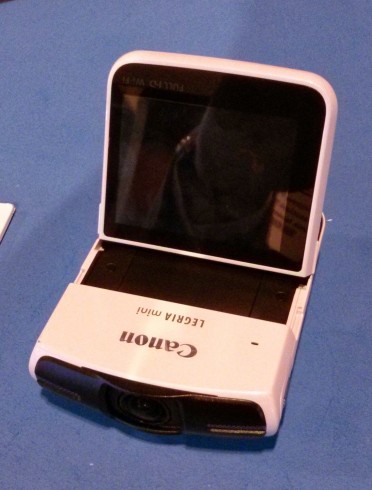 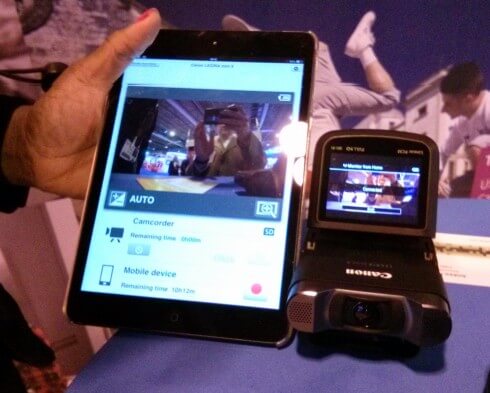 The Gadget Professor, Don Baine, checks out a forthcoming video camera from Sony which comes with a couple of neat new features.

This prosumer camcorder, HDR-PJ790 has two features that set the camera apart from the rest of the crowd. The first is that it has a built-in video projector, which will project both recorded video and video from an external source via HDMI. The second feature is gyroscopic image stabilisation, Balanced Optical SteadyShot with Active Mode moves the entire optical block at once, with the lens floating within the camera’s housing.

Jeffery Power spoke to Ben of Canon at the Digital Experience Booth. They talked about the Canon new R series of video cameras. They are part of the Vixia line. What makes this line special is you can connect them to your smart phone by Wi-fi. There are several apps that you can use, the first is Camera Access. It works on either iPhone or Android. It allows you to stream live from the camera to your phone. You can use it to control your camera from the phone. Another app is called Movie Uploader App which lets you upload your video to your favorite video sharing site. The Movie Uploader App is iOs only.

If you have ever watched a video someone tried to film from a vehicle you know how painful it can be because of the vibration. At one time the only way to stop this type of vibration was to spend hundreds of dollars on a Hollywood style contraption , not anymore. Delkin Devices is announcing the new Connector Bracket which is compatible with Fat Gecko Mini and The Fat Gecko Original. This will allow photographers and videographers to connect one camera, iPad or camcorder mount with a second Fat Gecko Original or Mini model. It can handle DSLRs and camcorders up to 8 lb. It provides triple and quadruple contact points, which allows you to attach a camera to any non-porous surface. The Connector Bracket has a slide and lock design which allows the camera to be placed at various angles and positions. Meaning if you want to attach your camera to the top  or side of a vehicle and have an image that is crisp and smooth, this is the bracket to use.

The Connector will be available for $19.99 directly through the Delkin Device Website or at any authorized retailer. Delkin Devices has been making accessories that are built to make life easier for photographers since 1986. The Canon Vixia camcorders have been popular with consumers and Canon have upgraded the range with six new models. Jeffrey Powers has been a Vixia owner for some time and chats to Ben Thomas from Canon to learn more.

Some of the new models have built-in wi-fi allowing live streaming from the camera to iOS devices such as the iPad and iPhone. The footage can be captured by the free Movie Uploader app and, if desired, uploaded to Facebook and other video sharing websites.

There’s also new dynamic image stabilization technology that has four different stabilization modes that kick-in depending on the particular situation.

The Vixia camcorders normally record the AVCHD format but they can record direct to MP4 which is great for sharing on media players and mobile phones. The cameras take SDXC cards (up to 64GB) and have internal memory; the price determines exactly how much. Roughly, 32 GB will give 12 hours of 720p footage.

Sorry we didn’t get to see Kellie Pickler. Interview by Jeffrey Powers of Geekazine. Samsung Electronics Co., LTD is introducing the HMX-Q10 camcorder at CES 2011. The idea behind the HMX-Q10 camcorder is too make recording movies as easy as possible, with the use of ground-breaking technology and smart features. This allows the consumer to record high quality videos with little effort. The HMX-Q10 is compact, easy-to use and affordable.

The first thing that you will notice when you turn on the HMX-Q10 is the Switch Grip. The Switch Grip allows the user to hold the camcorder any way they want and the G-magnetic sensor inside the camcorder turns the LCD display so it can be read at any angle. Easy Operation means that the user controls even the most detailed process through the LCD display including turning the camcorder on and off and operating the playback function. This makes controlling the device intuitive and fun. Recording videos is easy because the record button is placed prominently on the camcorder. The HMX-Q10 is thin, compact and light, which makes it something you will want to carry everywhere. It captures video in 1920×1080/60i full HD. It has an Optical image stabilization system which compensates for shaky hands. Allowing clear video even if you are walking or moving while recording. It also has a SMP BSI CMOS sensor that reduces noise and distortion. This helps if you are trying to record in low light. It also contains the Samsung Smart Auto scene recognition, which analyzes the scene for brightness, color, motion and subject and chooses the most appropriate settings for the creation of the best video. The Samsung Record Pause technology allows the user to pause the recording and then restart the recording without having to merge the files when finished.

The HMX-Q10 allows the user to choose whether to use automatic or manual controls. The manual controls allows the more experience user to control things such as White Balance, Exposure Values, Backlighting, Self Timer and C. Nite. There is also a new function called Art film, which creates special effects such as Time Lapse and Black and White. The HMX-Q10 is not only a great camcorder but it also doubles as a 4.9 Megapixel still camera. This means there is no need to carry a separate still camera.