After more leaks than a colander, OnePlus has officially launched the OnePlus 8T smartphone. As expected, this is an evolution of OnePlus 8 from earlier in 2020 and while there is no 8T Pro, there is a new Nord special edition coming to Europe.

Sticking with the 8T for now, there aren’t any great surprises from what was revealed in advance, though unlike the 8’s curved screen, the new 8T has a flat 6.55″ OLED screen, 2400 x 1080 pixels (402 ppi) with a 120 Hz refresh rate and HDR10+ support. It’s rated A+ from DisplayMate and it’s the first flat screen to be given this rating. I have to admit not being a great fan of curved screens, so I’m pleased to see this.

Inside the 5G 8T there’s a Qualcomm Snapdragon 865 supported by up to 12 GB RAM and 256 GB storage with UFS 3.1. Given the power on tap here, OnePlus have improved thermal performance to consistently deliver high-level gaming performance – Fortnite runs at 90 fps. In terms of electrical power, it’s a 4500 mAh battery and as pre-announced, it supports OnePlus’ 65W Warp Charge which will charge the phone by 60% in 15 minutes. That’s quick.

The phone comes in a choice of two finishes, Aquamarine Green and Lunar Silver but they are tied to the storage size of the device (at least in the UK). For Aquamarine Green, it’s the 8 GB + 128 GB version, and for Lunar Silver, it’s the larger 12 GB + 256 GB one. The Lunar Silver is a matte frosted glass finish, whereas the Aquamarine Green is a glossy finish, though it’s supposed not be a fingerprint magnet. I liked the Green of the 8 and 8 Pro.

Round the back, it’s a quad-camera array with the main lens rocking a 48 megapixel unit with optical image stabilisation. The other lenses include a 16 MP ultrawide with 123° field of view and there’s a 5 MP macro camera let’s you get in up close. Finally, there’s a 2 MP monochrome lens and the in-display selfie camera on the front is 16 MP.

There have been camera improvements for low light levels in this iteration. For still photography, Nightscape photo mode will automatically be engaged when it’s dark, and for video recording, there’s a new Video Nightscape mode which brings light enhancement to videos.

The 8T will come pre-installed with Android 11 in the shape of OxygenOS 11 which is optimised for one-handed use. They’ve partnered with Bitmoji to bring avatar digital experiences to OnePlus – “The Digital You” – and balance personalisation with privacy by using avatars to represent you in the digital world. I’m obviously too old to get excited by this…

If you’ve been a major museum recently, you might have come across Rewild, an AR app developed with Phoria, Netflix and Google to bring the natural world to life. The app’s been enhanced for OxygenOS and now delivers 4K content to the 8T. 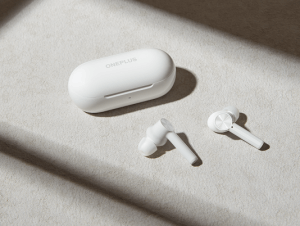 In other news, there’s a OnePlus Nord special edition that comes in Gray Ash with 12 GB RAM & 256 GB storage. It’ll be priced at 499€ / GB£469 and available from 15th October. Nord models for the US market will be announced later in the month.

The OnePlus Buds Z earbuds were also announced for those people who prefer in-ear headphones. With an IP55 water resistance rating, they’re perfect for getting sweaty at the gym. Steven Harrington has done a special edition but otherwise they’ll be available in white and grey options for GB£55 /  US$49.99 and available from 4th November. I think I might get some of those if I can snag a pair of the special editions.

There were also hints of a currently unannounced product, perhaps a smartwatch….Watch this space.