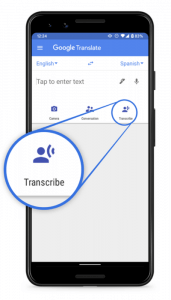 Google announced that Google Translate will be rolling out in the next few days for any combination of the following eight languages: English, French, German, Hindi, Portuguese, Russian, Spanish, and Thai.

Recently, I was at my friend’s family gathering, where her grandmother told a story from her childhood. I could see that she was excited to share it with everyone but there was a problem – she told the story in Spanish, a language that I don’t understand. I pulled out Google Translate to transcribe the speech as it was happening. As she was telling the story, the English translation appeared on my phone so that I could follow along – it fostered a moment of understanding that would have otherwise been lost…

Those with Android phones can try the transcribe feature by going to their Translate app on Android, and making sure they have the latest updates from the Play store. Select the source and target languages. Users can pause or restart transcription by tapping the mic icon.

Right now, the transcribe feature will work best in a quiet environment with one person speaking at a time. In other situations, the app will try to provide the gist of what’s being said. There is also a Conversation mode in the app that can continue to help users have a back and forth translated conversation with someone.

According to Venture Beat, Google plans to bring Transcribe to iOS devices at an unspecified date in the future. Venture Beat also points out that at launch, Translate is unable to export speech recording audio or a translation transcription. That feature might appear in the future.

Personally, I think Google Translate is a good thing that will help people to communicate with each other. It can help break down the language barrier and perhaps encourage people to get to know their neighbors who speak a different language than they do.