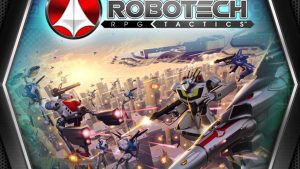 Palladium Books held a Kickstarter to produce Robotech RPG Tactics. A total of 5,342 backers pledged $1,442,312 to bring the project to life. Robotech RPG Tactics is a tabletop strategy game that expands on the popular Palladium role playing game. Palladium was intending to create miniatures as game pieces. Unfortunately, things did not work out as planned.

President of Palladium Books, Kevin Siembieda, posted an update on the Robotech RPG Tactics Kickstarter on February 27, 2018. In it, he announced that they will be unable to produce some of the rewards that were offered in the Kickstarter, and explained why.

So it is with sadness and tremendous heartbreak that I announce that, despite our best efforts, we are unable to produce the Robotech RPG Tactics Wave Two rewards. Moreover, after proudly carrying the legacy of Robotech in the role-playing games medium for 30 years, our license has expired and is not being renewed.

To get the full story of what happened, I recommend you read the Kickstarter update. In short, Palladium Books decided to contract with Ninja Division/Soda Pop Miniatures. In addition to running the Kickstarter, NinjaDivision/Soda Pop Miniatures would also select the manufacturer/broker in China, choose the manufacturing process, choose the type of plastic, create the game, and hire talented sculptors and artists.

Palladium developed the game rules and provided Ninja Division’s sculptors and artists with reference materials to help them design the miniatures just right. A big problem occurred when Palladium learned that the 3D sculpts from the sculptors were not compatible with the tooling process the manufacturer would be using. From there, things spiraled and the costs to produce everything Palladium intended to became too high.

Kevin Siembieda posted that they cannot produce the Wave Two rewards. He has offered Wave One rewards in exchange for the unrealized Wave Two rewards – and points out that people will have to pay for shipping. There have been a few more updates since the original announcement, and those who spent money on the Kickstarter might want to take a look at those.