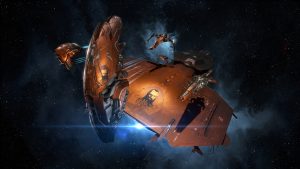 EVE Online has created a skin to honor CCP Blaze, one of the Senior Software Engineers with their Audio & Graphics team. He passed away suddenly on November 14, 2017, and is survived by his fiancée and one year old daughter.

EVE Online will be hosting their own internal fundraiser and will be supporting his family, friends, and co-workers as best as possible. They also are honoring CCP Blaze by releasing a new skin. It is called the “Blaze” Squadron Skin Set. All profits from this set will be donated directly to the fiancée and daughter of CCP Blaze on behalf of the EVE Online Community.

The special skin will only be available as a one-off between now and December 19, 2017. After that, it will be retired from the New Eden Store, and will never be sold again.

It will be available for the following hulls, in a bundle for 495 PLEX:

It will also be made available separately for the Armageddon, CCP Blaze’s favorite ship, for 110 PLEX. EVE Online wrote a special description for the “Blaze” Squadron SKIN. It honors CCP Blaze and writes “Blaze” into backstory as an immortalized part of New Eden’s history.