The OxyLED T35 Desk Lamp is a small silver grey LED desk light powered by USB. It’s a neat idea given the availability of USB ports and reduces the need for mains power sockets, which are always in short supply. Let’s take look and see if the T35 can replace my Anglepoise. 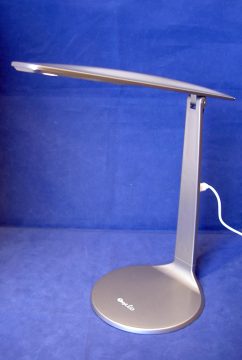 The T35 has three main parts – a weighted base, an upright with microUSB power socket and a cross-piece with two rows of white LEDs at the end of the longer side. The cross-piece is hinged at the upright to raise or lower the light. and can fold parallel to the upright. The base is 13.5 cm across and with the cross-piece horizontal, the light is 24.5 cm tall. At full reach, the T35 is just under 45 cm. From a distance the silver grey finish does a fairly good impression of being metal, but it’s obviously plastic when you touch it.

In the box, there’s the lamp itself along with a 1.5 m USB cable. The cable is white, which might appeal to Apple lovers, but I would have preferred a colour matched cable in dark grey. Even black would have been better in my opinion. It’s also a pity that the microUSB port isn’t a bit lower down the the upright…or a right-angle microUSB plug would have been good too.

Some descriptions of the T35 refer to the lamp as being USB-charged but let’s be clear here: it’s USB-powered as there’s no battery. Pull out the cable and the light goes off. Obviously the T35 can be run from a USB battery pack if needed. The low voltage is good for children too – no-one’s going to get a shock off this. 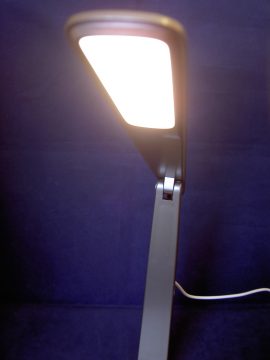 On the plus side, the OxyLED lamp can adjust the LED brightness. Tap the on/off button once and the T35 comes on full power (160 lm), but now hold the button and the brightness will slowly fade to the desired level. Tap it again and the light will go completely off. I like this feature as I can get the light level just right. The LEDs put out a slightly yellow colour, which is much better than the harsh blue white of some LEDs.

The max power output of the T35 is 4W so clearly there are energy-saving benefits over a normal desk lamp that at worst, has a 60W incandescent bulb. The LEDs are expected to have a 20,000 hour lifespan. That’s over 2 years.

Where it goes wrong for the T35 is the price – it’s currently on Amazon.co.uk for a penny under GB£40 (though it’s a slightly more reasonable US$29.99 on Amazon.com). That’s too expensive for a plastic light without a battery no matter how stylish. I think somewhere around £15-£20 would be about right.

Thanks to OxyLED for providing the T35 for review. Unboxing video below.