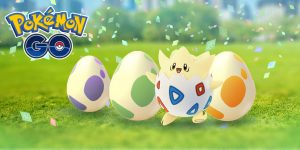 Niantic announced that the Pokémon GO Eggstravaganza has started. It began today, April 13, at 1:00 PM PDT. The event will last through April 20, 2017. The announcement doesn’t specifically mention Easter, but the egg reference makes me think that this is Pokémon GO’s Easter holiday event.

During the Eggstravaganza, a greater variety of Pokémon can be found in 2km Eggs. Those are the Eggs that require the fewest kilometers of walking in order to make them hatch. It seems to me that the 5km Eggs, and the 10km Egg tend to hatch more interesting Pokémon than the 2Km Eggs do, so more variety on the 2km eggs will be fun.

I just put a 10km egg into my only Incubator yesterday, so it is going to take some work for me to get that one to hatch so I can put a 2k Egg into the Incubator. If only I had waited! The Eggstravaganza doesn’t change the variety of Pokémon that hatch from the 5km or 10km eggs.