When it comes to headphones, I’m a firm believer in that you get what you pay for. Undoubtedly there are diminishing returns above a certain price point but the bundled headphones that used to come with mobile phones were complete rubbish in terms of both their build quality and audio characteristics. Fortunately, those days are past and most respectable manufacturers provide usable headphones.

On review here are the Mpow Swift Bluetooth 4.0 wireless headphones which are marketed as “sweatproof, jogger, running, sport…earbuds…with AptX mic hands-free calling”. With an RRP of GB£30, they are often found for sale at about half that, say GB£15, which is a fantastic price for Bluetooth wireless earbuds….if they sound good. My daily listeners are Sennheiser CX300s, so the Swift’s have got their work cut out here. Let’s take a look and first up is a short unboxing video.

As can be seen from the video and the pictures, the Swift headphones are of the earbud type, with a loose ribbon cable connecting the two ‘buds. The cable doesn’t grip the neck like some models and the ribbon cable keeps tangles to a minimum. The headphones come in a good range of colours, with a choice of black or white for the body and then a selection of highlight colours, including blue, yellow, magenta, green and pink. 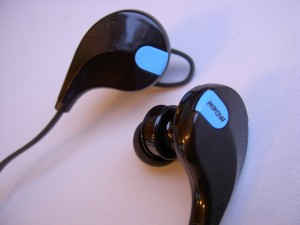 Being Bluetooth headphones, the Swift earbuds are quite big on the outside of the ear containing the wireless electronics, rechargeable battery and the mic for hands-free calling. On the left headphone there’s a covered microUSB port for charging that comes with a personal warning that fingernails are required to get the port cover off. The coloured flash on this headphone doesn’t do anything, whereas over on the right, it acts as an action button, turning the headphones on and off, play / pausing music and taking calls. There’s also a volume rocker and microphone on the right side. When doing some activities with the action button, there’s a voice confirmation such as “Power on” or “Connected” which can be handy when trying to figure out what state the headphones are in. 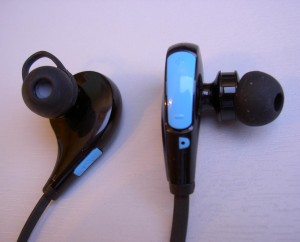 While all the buttons worked, I disliked using the buttons, partly because I have big fingers and the buttons are small, but mostly because I don’t like the sensation of the earbud moving within the ear when I tried to press the buttons. YMMV, as they say.

Standard earbuds are notorious for falling out during the movement and with the extra weight on the headphones, one might think that the Swifts would drop out of the ear at the slightest twitch. Fortunately Mpow has this covered with a couple of retaining options. 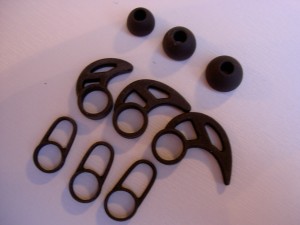 First, the Swift headphones come with three sizes of earbud for small, medium and large earholes. Second there are three sizes of ear loops that catch on the inner part of the ear and finally there are hooks which lock into parts of the ear for a really firm hold. Both the loops and the hooks easily slip over a round section on the headphones. For retainability, the hooks are impressive, though you do need to spend a little time get them in the right place the first time. Once locked behind a suitable part of the outer ear, they easily keep the Swift headphones in place, even while running. Obviously they’re still going to come out if something catches on the lead (which is a good safety feature) but short of deliberately taking the Swifts out, they’re staying in. For extended listening, I did find the Swifts a little more tiring than other earbuds, possibly simply because of the extra weight. 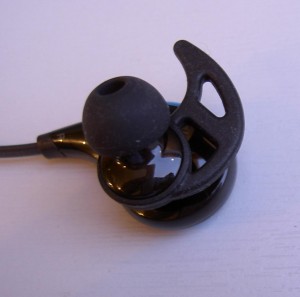 Finally, it brings us to audio quality and Mpow may force me to re-evaluate my initial premise that you get what you pay for as the Swifts are really very good. I listened to a selection of tracks using a OnePlus 2 smartphone playing from a range of music services, some streamed, some downloaded. There was good presence and clarity, and while the high frequency wasn’t perfect the bass was effective without being overpowering. Seriously, the Swifts weren’t far off the Sennheiser CX300s, which surprised me.

There’s the additional benefit of being able to take phone calls with the Swifts too.  When a call comes in, the Swifts announce the incoming phone number which is a great feature for when the phone is in the bag or otherwise out of view. Callers generally said that they could hear me clearly but it was obvious that I was hands-free.

Overall, the Mpow Swift headphones are great value. They seem well made, sound great and stay in the ear, even when exercising. At GB£15, they’re not throwaway but you aren’t going cry too much if you damage or lose them during sport. Recommended if you are looking for Bluetooth sport headphones.

Thanks to Mpow and Patuoxun for the review Swift Bluetooth 4.0 wireless sport headphones.