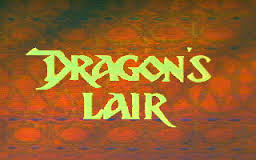 Do you remember the Dragon’s Lair video game? It was a unique type of game that attracted a lot of attention back in the day. The game debuted as a LaserDisc format game which was something like an interactive movie. The graphics were vastly different, and better, than every other video game in the arcade.

I can’t tell you how many quarters I spent trying keep Dirk the Daring alive for as long as possible. Truth be told, I was absolutely terrible at the game. What kept me coming back to it was the animation and the desire to learn how the story ended.

The original creators of Dragon’s Lair, Don Bluth and Gary Oldman, have a Kickstarter going right now. The goal is to raise enough money to create “Dragon’s Lair: The Movie”.

They need to raise $550,000. At the time I am writing this blog, the Kickstarter has 28 days to go. There is a whole bunch of interesting rewards for backers that pledge specific amounts of money. Some rewards include: digital downloads, Blu-rays, DVD’s, original signed books and artwork, signed posters, t-shirts, and more.

I have mixed feelings about the potential production of “Dragon’s Lair: The Movie”. On the one hand, it would be awesome to see the entire adventure of Dirk the Daring in a movie format. That’s a huge improvement over gathering around an arcade game and catching bits and pieces of the story (based on how good the current player happened to be). I’ve never seen anyone complete the game – so it would be nice to finally get to the ending in the movie.

On the other hand, I’ve always found Princess Daphne to be problematic. Back in the day, it was difficult enough to be the only girl in the arcade. Everything about Princess Daphne, from her barely dressed glitter covered attire, to her bubble-headed voice, made me uncomfortable. It was as though the game had a “Boys Only” sign slapped on the front of it. Why couldn’t they have given Princess Daphne a princess gown to wear?

The game Dragon’s Lair was released in 1983. Decades later, the game still has plenty of fans and lots of nostalgia attached to it. I’ve no doubt that the adventure of Dirk the Daring would be interesting to watch in a movie format, and I am inclined to go see this movie (if it gets made). At the same time, I don’t think Princess Daphne will be very well received today, in a world where 52% of video game players are women.