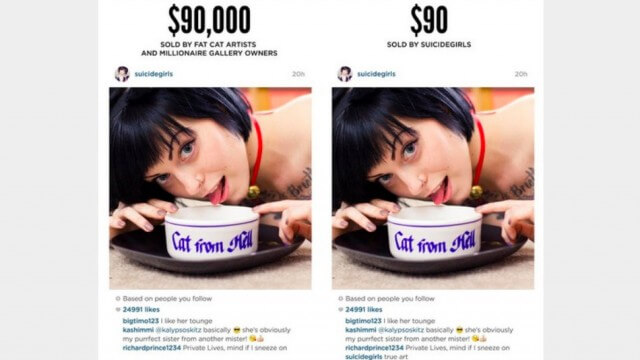 If you haven’t heard by now, a guy named Richard Prince, who claims to be an artist, has poached several Instagram images, without the photographers’ consent, and turned them into his own pieces of work. He’s selling these for upwards of $90,000 at a gallery.

One of the “subjects” of his artwork happens to be Selena Mooney – founder of Suicide Girls. She decided to do exactly what Prince did – sell his work on her own site without his permission.

“We at SuicideGirls are going to sell the exact same prints people payed [sic] $90,000 for $90 each,” Mooney,  wrote in a post on Facebook, “Do we have Mr. Prince’s permission to sell these prints? We have the same permission from him that he had from us.”

She also noted that proceeds would go to charity.