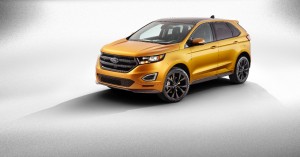 The 2015 Ford Edge Sport has a lot to offer drivers no matter what they consider to be the most important aspects of a vehicle. It is a utility vehicle that looks beautiful. It also has been officially SAE-certified as the most powerful Edge ever, with the highest horsepower and torque ratings yet.

Inside the 2015 Ford Edge Sport you will find leather-trimmed sport seats with perforated suede inserts, aluminum brake and accelerator pedal covers, and metal-plated accents throughout the vehicle. It has ambient lighting.

The new Ford Edge Sport also includes Ford SYNC with 8-inch touch screen in the center stack. You will find two LCD screens in the instrument cluster (both of which are configurable). In addition, it also has a media hub that contains 2 USB ports, an SD card reader and an auxiliary input jack. A 12-speaker Sony audio system is standard in the 2015 Ford Edge Sport.

Ford’s newest EcoBoost engine, a 2.7-liter V6, powers the 2015 Ford Edge Sport. It delivers a small increase in horsepower over the previous standard engine (which was a 3.7-liter V6). The EcoBoost engine also gives a 25 percent increase in torque over the previous engine. Together that gives the 2015 Ford Edge Sport a total of 315 horsepower and 350 lb.-ft. The cylinder block of the 2.7-liter EcoBoost uses the same compacted graphite iron as Ford’s 6.7-liter Power Stroke.

The Edge Sport suspension has been upgraded with front and rear antiroll bars that are 15 percent stiffer than the base model. Enhanced damping gives Edge Sport improved road-holding capability and provides the driver with more control, sharper steering, and greater confidence.