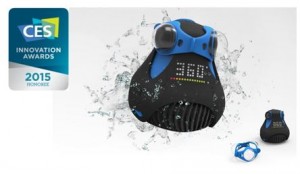 GIROPTIC is a company that is based in Lille, France. They have a versatile line of robust 360-degrees cameras and accessories that enables people to self-capture full HD, 360-immersive footage of themselves enjoying their favorite activities. GIROPTIC has been named a CES 2015 Innovation Awards Honoree for its 360Cam.

The 360Cam is the world’s first 360 palm-sized camera that allows users to record videos, take still photos, and stream video in real-time over Wi-Fi from “Up, Down and All Around”. It is lightweight, weighing in at 6.3 ounces, it is also rugged and the most versatile cam on the market.

Additional features include three microphones. It has integrated Wi-Fi to post photos or stream videos in real-time with automatic geotagging, letting the users’ followers know where the action is taking place. It is also waterproof! The 350Cam can be paired with other GIROPTIC accessories to enhance its usability.