Archos today announced the new Archos 50 Diamond 4G smartphone as the new top-of-the-line model in Archos’ sub-$200 4G smartphone range. French company Archos has a long history with Android tablets and smartphones and 50 Diamond takes over from the Helium 50 as the Archos’ flagship devices. Revealed at “Paris CES Unveiled”, the new phone will run Android 4.4 KitKat out the box and presumably an upgrade to Lollipop is in the offing, though it’s not confirmed. 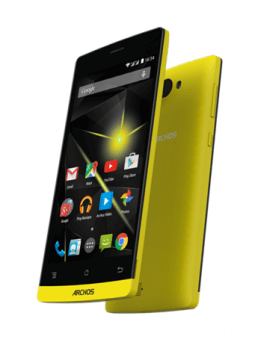 Spec-wise, the phone is powered by a 1.5 GHz octa core Qualcomm Snapdragon 615 with 2 GB of RAM. The 50 Diamond sports a 5″ full HD IPS screen and 16 GB RAM. Usefully, there’s a micro SD slot to expand the storage if needed. Other features are as expected in this price range with 16 MP and 8 MP cameras. In terms of 4G and LTE, the radios support 800 / 1800 / 2100 / 2600 MHz frequencies with LTE cat 4 150 Mbps / 50 Mbps. Interestingly, the 50 Diamond can take dual micro SIMs, which could be handy for frequently travellers or those who have to juggle personal and business phones.

“In 2014, consumers don’t have access to high performance handsets from traditional smartphone vendors below $500” says Loïc Poirier, General Director of Archos. “With the Archos 50 Diamond, we are pushing forward the same advanced technology but we make it accessible to all consumers.”

In related news, Archos also announced the refresh of Helium smartphone line plus new tablets: the 80b Helium 4G, an “over-equipped” Android tablet (their words, not mine!) will retail for $150. It’s an 8″ tablet and joins 7″ and 10″ siblings in the Helium tablet line-up.

For more information about Archos and its entire selection of smartphones and tablets, visit Archos during CES 2015 at Sands Expo Hall A-C, Booth 70437 or at www.archos.com