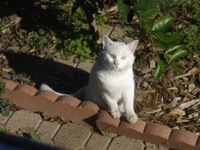 The innocent looking cat that is wandering through your backyard might be up to something sneaky. Instead of hunting mice, he or she could be hunting for Wi-Fi networks. Of course, the cat probably just thinks it is out for its usual “wander around the neighborhood”.

Gene Bransfield gave a talk at DefCon titled “How to Weaponize Your Pets”. In it, he described how to turn your cat into a “WarKitteh”. Gene Bransfield works for the security company Tenacity, and he created the “WarKitteh” idea because it amused him. The “WarKitteh” name is a reference to an activity called “wardriving”. In short, it is an activity in which a person drives around looking for weak or unprotected Wi-Fi networks. Now, your cat can go do that all by itself, no driving required.

Bransfield put together a specialized collar that contained mini-computers and an antenna (which were sewn into a collar that could be worn by a pet).

The collar was placed on a Siamese cat named Coco, who belonged to Brandsfield’s wife’s grandmother. Coco turned out to be pretty good at wandering the neighborhood. Coco spent three hours exploring some of the backyards nearby.

At the same time, the cat was mapping out dozens of the neighbor’s Wi-Fi networks and was able to gather enough data to determine which would be easy to get into. The “WarKitteh” identified four routers that were using an old form of encryption that could be easily hacked into and four more routers that had no security protection on them at all.

The primary inspiration behind the “WarKitteh” was entertainment. The results, however, showed that the “WarKitteh” could be an effective way to teach people about how to better protect their Wi-Fi networks. The “internet” is in love with cats, so I can see where this has potential.

The photo you see at the top of this blog is one I took of a cat that was wandering through my backyard a few years ago. That was before “WarKitteh” technology existed. The next cat that wanders through your backyard could be a “WarKitteh”, and you would probably not even know it had been there!