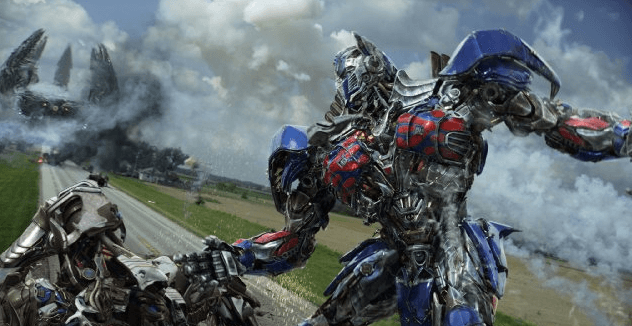 Transformers: Age of Extinction wasn’t the worst thing I’ve ever seen. I wasn’t in the mood for any kind of thinkin’ movies, and this one def’ isn’t that. It was fun and full of eye candy and explosions and more explosions and carnage and explosions. Don’t forget the slow mo close-up of a girl w the sun setting behind her. But they did a better job on the Transformers’ faces this time. Like, you know, they had them. The story was fine, we got some new characters, some old, of course Optimus Prime is front and center, but the Dinobots didn’t show up until almost the end.

I always get the feeling, watching these movies, that someone was only just “aware” of the original Transformers. There will be a name or car or ship that’s from the originals but it’s just not quite right. It’s like someone just saw a couple clips from the old shows and went “Yeah, put that in there.. I dunno.. I heard someone was called Prowl, I guess? Use that for one of the guys, I don’t care if he’s good or bad, whatever.” I’m not asking for a lot here, just get the characters and what they turn into right.

So am I recommending this movie after all that? Sure. If you want a good, fun, shiny movie to watch, it’s that. Just make sure you go to the bathroom ahead of time because, yes, it IS almost three hours long. I think if you get there just as the movie is starting, it’s fine. The nonstop action keeps things moving along. But throw in the 20 mins of previews and whatever commercials before that (depending how early you get there), it does start to seem like you’ve been in your seat forever. It could have been chopped down a little, because let’s face it, we don’t really need three hours of Michael Bay in any one sitting.