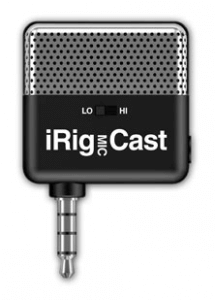 After reviewing the iRig Mic which includes a full sized microphone. I really did not know what to expect in Audio quality from the iRig Mic Cast for the iPhone/iPod/iPad & most Android Devices. But knowing what the IK Multimedia folks had accomplished with the iRig Mic my expectations where high.

I attend a lot of conferences where  like to record the speakers, the biggest challenge when recording with the iPhone is to eliminate background noise or actually for the recording to be loud enough to hear it on playback. So this is where I really wanted to see if the iRig iMic Cast can help out.`

The iRig Mic Cast comes with a stand & microphone. The Microphone has two settings Low and High you can also plug in a headset to the microphone to get real time monitoring.

I did a test recording with the iPhone then connected the iRig Mic Cast and repeated, the iRig sound quality was cleaner, and 2 to 3 times louder. I ran the mic on the high setting and would only likely go to the low setting during one to one interviews.

I did offset testing as well, where I was about 10-15 feet away from the rig and it picked my voice up fine. The mic records equally well on both sides of the mic. The included stand makes it easy to have it set on a desk or table and will come in handy during panel recordings.

This setup is perfect for conferences, training, and one on one interviews. In a interview situation I would hold the iPhone and position the mic appropriately. I have tested other similar mics for the iPhone, and it works as well as others I have reviewed. The $39.99 price point is perfect for a solution that you can literally carry around in your pocket.