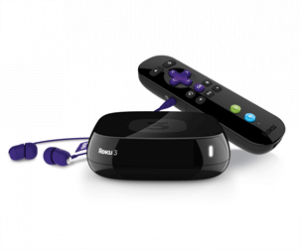 Recently Roku released its Chromecast-like steaming stick. This comes on the heels of a version 3 release last year of the set-top box, an update that came with a remote that has a headphone jack built-in, allowing private watching for those times when the house needs to be quiet. The box retails for $99.99, but if you act today, you can get a deal.

Today only, Woot, the daily deal site now owned by Amazon, is offering the little set-top box for the price of $64.99 — a savings of $35 over the regular price.

“Faster and more powerful than ever. Enjoy 1,000+ channels of movies, TV shows, sports, and more. Plug headphones into the motion-control remote to play games or watch late-night flicks without disturbing the household. Fully loaded with one-stop search, 1080p, dual-band wireless, Ethernet, USB, plus a free Roku app. The Roku 3—the new streaming standard”, Woot describes it.

Roku is perhaps the prime player in an increasingly competitive market that includes Google and Apple as the other big players, though Microsoft’s new Xbox One is also a part of this, though it does more than just video. And remember, you can watch the Geek News Central podcast on it as well!