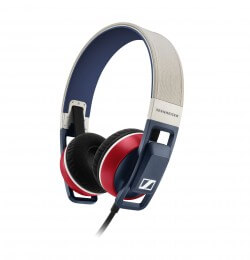 Sennheiser has launched an advertising campaign that includes some contests. Participation requires both online and offline activity. It is called Let Your Ears be Loved. The purpose is to feature Sennheiser’s Urbanite headphones. The ads that go along with the contest are unique.

The target audience of the ads are the generation of Millennials who Sennheiser’s believes want headphones that not only sound good but also look good. As such, they created an idea that emphasizes how much one’s ears will love the Urbanite headphones.

To me, it’s a little icky. That being said, I’m in my 40’s, and not the demographic that Sennheiser is trying to attract with this particular ad campaign. Maybe Millennials, people who are between the ages of 18 and 25, see the ads completely differently than I do. I’ll give Sennheiser this: the ads are very creative!

Part of the “Let Your Ears Be Loved” campaign are contests in which someone will win free Urbanite headphones. To participate, you must go to the website and select one of the “romantic” videos to watch. Next, share that video on Facebook, Twitter, or Tumblr. After you do that, a clue will appear on the Sennheiser website. The clue gives you an idea of where in New York City to go looking for a golden ear. Those who find a golden ear will receive free Urbanite headsets. This contest runs from September 12 through September 21, 2014, in New York City. A similar contest will be held in London starting October 20 and ending November 2, 2014.

Or, you could participate in the “Show Me Your Ears” portion of the campaign. Take an “ear selfie” and post it to Instagram. Tag that selfie with @Sennheiserurbanite and #Earlove. The best ones will win free Urbanites. This contest is limited to people who live in the United States, Canada, and members of the European Union. Visit the Sennheiser website for more details.