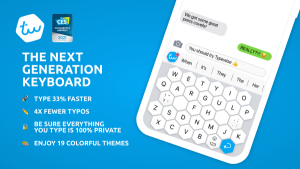 Pioneering Swiss deep tech startup,Typewise, is celebrating the launch of their next-generation smartphone keyboard app, announced at this years CES. With all-new autocorrection technology patent pending, Typewise 3.0 has been developed to further speed up smartphone typing, with the support of the Swiss Agency for Innovation – Innousuisse, enhancing its exacting autocorrect abilities, language recognition, and enhanced data privacy. The new version will be available in early 2021.

Typewise’s successful concept is powered by a patented ‘honeycomb’ style keyboard layout designed specifically for smartphones to increase efficiency as a user experience, conventional keyboards result in around 1 in 5 words having a typo. Typewise reduces those typos by 80% and results in 33% faster typing speeds.

In addition to helping users type faster with fewer errors, Typewise can automatically recognize the language of which the user is currently typing and switch to that language, preventing any incorrect words from entering the user’s work, without having to change the language in the settings. This recognition software is so acutely sensitive, it even recognizes and assists users when they type in a dialect or use colloquialisms; this ground-breaking feature is currently available in 40+ languages, with more on the way.

This new system provides higher percentage of correctly corrected words than other leading keyboard players such as Gboard and SwiftKey. This ground-breaking autocorrection technology was jointly developed with top AI engineers from ETH Zurich, one of the world’s leading institutions for technology and engineering.

This complex technology has been developed with AI algorithms that are capable of running offline, which safeguards user privacy. Most importantly, neither the Typewise app, nor third party apps, can access any user data; a complete break from the existing market.

The development of this game-changing technology follows an informative study conducted by Cambridge University and ETH Zurich. The study looked at data from 37,000 people’s typing habits and analyzed the difference from participants who used autocorrect technology and those that did not; the findings of the study concluded that choosing word predictions manually does not speed up typing, but true predictive autocorrect technologies do speed up typing – and that’s where Typewise comes in.

To date, Typewise has amassed more than 500,000 downloads with 130,000 active users, impressing the elite panel of industry judges at the CES Innovation Awards, a program owned and operated by the Consumer Technology Association (CTA), which annually honors design and engineering in consumer technology.

Typewise co-founder and CEO, David Eberle, comments: “Being able to launch version 3.0 is a great way to start 2021. The team have worked hard to build ever-more powerful features into our award-winning autocorrection technology, resulting in a new version of Typewise that is a great feat in design, efficiency and accuracy. We are proud to have worked closely with our user community on our new release, to get a good understanding of what’s needed by different language users across the world.

“Typewise began as a solution to make daily life easier, to put a stop to annoying typos and cumbersome typing and our mission to change the way we input information into our devices and our latest offering brings us ever closer to realizing our goal.”