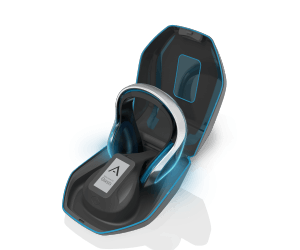 Scott Ertz interviews Phil Diamond about the Oasis customizable noise-cancelling Bluetooth headset from Audasis. The concept behind the Oasis Bluetooth headset is that it takes any conventional user-provided ear buds and converts them into a noise-cancelling Bluetooth headset. The consumer plugs their conventional earbuds into the Oasis, and then pairs up the Oasis to their Bluetooth playback device. The Oasis also includes a Bluetooth dongle with the headset to enable the user to convert any device that has a conventional 1/8th inch headphone jack, say an old CD player or a 1/8th inch headphone jack on a plane to Bluetooth to be used with the Oasis. The Oasis includes a wireless charging stand and up to approximately 30 hours worth of audio playback depending on the impedance efficiency of the earbuds and the loudness of the music.

Audasis hopes to ship the Oasis Bluetooth headset in Q4 of 2016 in time for the Christmas holiday season. The target selling price is $150.

There are some products that are shown at CES that are just cool and everyone who is a kid at heart just wants, the AR. Drone by Parrot is one of those gadgets. This year at CES 2012 they introduced AR. Drone Mark 2. The Mark 2 (aka AR. Drone 2.0) is controlled by a smart phone or tablet. It has a one button launch. Once it is launched it will sit and hove till the next command. The AR. Drone Mark 2 can fly up to 150 feet in the air, or as far as wi-fi will allow.  AR. Drone Mark 2 has stabilization and pressure sensor technology built into it. On the front is an HD camera and a standard def camera on the bottom. You can stream and record the video back to the phone via wi-fi. The video can then be uploaded to your favorite social site, including YouTube and Facebook.

It come with two hulls one for in home use and one for outdoor use. It is built to take some crashes, but if something breaks you can get replacement parts are on-line. The AR. Drone Mark 2 should be available according to Peter George of Parrot in the second quarter of 2012 for about $299.00

Once you are finished playing with the AR. Drone Mark 2, you may want to relax with a little music and some quiet time, well Parrot has you covered there too. They are introducing a pair of stereo cordless headsets that are noise canceling called the Parrot Zik . They work over either Bluetooth or the included cord. They run on a chargeable battery and give about 5 hours of listening pleasure. Once the battery runs down you can continue listening by connecting the cord. What makes the Parrot Zik headphones stand out besides the great style by French designer Philippe Starck are the controls on the headphones. There is a sensitive touchpad on the headphone which allows you to skip back and forth thru tracks by swiping right or left and control volume by swiping up and down. The headphones fold down flat to fit into a small carrying case. There is no price or launch date at this time, but they should be available sometime in 2012 at various retailers. All together Parrot introduced seven new products at CES 2012, including three additional products in the car environment and the asteroid marketplace.   You can take a look at all of them at their Web site Parrot.