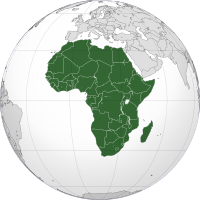 As of 2011 Africa now has more mobile users then South America, second only to Asia according to a study by GSMA at Kearney In fact as of 2015 more people in Africa will have mobile access than electricity in their homes. There are a couple of things that have encourage this growth.

In Africa over 96 percent of mobile phones are prepaid. This is not surprising, most users can not afford 1-2 year contracts. Also in most African countries the mobile industry is highly competitive. Many people have multiple sim cards, which they switch in and out depending on the deal they can get from the different carriers. In fact it is not unusual for someone to own a sim card and not own a mobile phone. They will simply borrow a friend’s phone and stick their sim card in it, then switch it back once they are done. This sort of behavior does make it difficult to count the actual number of mobile users in Africa, most studies are counting the number of connections not the number of users. Still mobile communication is the main form of communication for most of Africa. Even in the most developed countries of Africa such as South Africa and Algeria the fixed line penetration is only 10 percent. In some countries like Benin and the Ivory Coast the fixed line penetration is as low as 1 percent. Because fixed lines require expensive infrastructure its penetration is likely to grow very slowly if at all. Mobile services are rapidly filling that gap. Voice services still dominate the mobile market. However the growth of 3G, Edge and GPRS networks have helped to boost Internet access. For example in Kenya, data services have grown 67% CAGR (compound annual growth rate) in the last 4 years.

The heaviest penetration of mobile services is in urban areas. Rural areas are often served by community phones. Where a single phone services a whole village. The usage on these community phones are often monitor and when it reaches a certain level fixed network are installed. Whether the majority of mobile users are male or female often depend on each country’s customs and taboos. In the countries of Zambia, Senegal, Benin and Uganda most users are male, while in South Africa and Mozambique most users are female. The mobile industry throughout Africa are trying various innovative ways to allow more and more people to have access to the mobile market. The GSMA goal is to bring services to 80 percent of the Africa’s population with an income of less than $4.00 a day and 60 percent with an income of less the $2.00 a day. They are attempting this while dealing with unreliable electrical service, ( The mobile sector is playing a key role in promoting rural access to electricity and sustainable energy) arbitrary licenses, high taxation and in many countries multiple levels of corruption. Because there is no existing infrastructure as there is in the west, mobile companies in Africa have the advantage of being free to innovate and find what works for them. Although mobile services only contribute on average 3% of the GDP of the various African countries, it’s importance to the continual growth of Africa’s economy can’t be understated. Studies by the World Bank have shown that in developing countries for every 10 percent increase in penetration by the mobile market the is a 0.81 percent increase in the countries GDP.

Mobile services are being used to promote improvements in agriculture, banking, education and health care. The GSMA development fund established in Kenya M-Kilimo has a dedicated help line to provide farmers with information on farming methods, disease control, farm specific weather forecast and market price information. Mobile banking is big in Africa in fact far bigger than it is in the west. For many people it is their primary bank. They use mobile banking to pay, receive money, to access saving accounts, insurance, pensions and even arrange micro-loans. Mobile services are also being used to offer education in areas and among various segments of the population that do not have access to brick and mortar schools. Mobile technology is being used in the area of healthcare in Africa to capture and analyze disease data, provide remote diagnoses and health education and to coordinate the distribution of drug and medical supplies. Mobile services are also being used to communicate during the times of natural disasters, to make sure the services get to where and when they are needed. Clearly mobile services are important to Africa’s future economic development and in some areas they are ahead of the west especially the United States in it use.