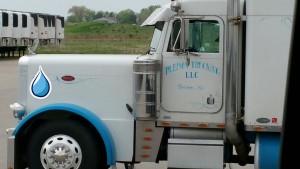 For the past few years we’ve been periodically hearing about autonomous vehicles; both cars and trucks. Most of the stories have been positive, yet vague on when we might actually see them. The nebulous “10 year” catch phrase always seems to make it’s way into these stories.

Most of the stories about the Google self-driving car seem to have been carefully managed. The Google car has driven hundreds of thousands of miles without causing an accident. However, that hasn’t stopped other human driven vehicles from plowing into it.

Automation theory demands closed systems, where all variables are known, without the possibility of new or unknown variables being introduced into the system. For example, it has long been possible to create 100% robotic warehouses. However these storage and retrieval warehouses are completely closed systems, closed in the same way that electronic circuit boards are closed that run smartphones, televisions or computers. There are automated garages in New York City that make it possible for every resident of incredibly expensive apartments to park their cars in marvelously automated and efficient parking garages, maximizing the expensive New York City real estate. These automated car storage systems are totally closed systems, where all variables are known 100% of the time.

In other words, Google has managed to turn Mountain View into a closed system, with every possible address known, every parking space known, and every variable the car might encounter known and accounted for. Think of it in terms of how a roller coaster makes a closed loop. The only thing that remains open-ended in Mountain View for the Google self-driving car is the presence of other pedestrians and traffic.

Contrast that with the real world, where the number of open-ended variables are frequently vast. I use Google Maps multiple times a day on a daily basis. Even though Google Maps is probably the best mapping database available, it is only accurate about 90% of the time. If I put in an address of a large business complex, Google Maps or any other GPS system can only take me to the main address, which most times can be a block or more away from the location of the drive I actually need to turn in to. A self-driving car in the open system of the real world would likely not know where the front entrance of any given business actually was or where vehicles should even park. Each one of these things would have to be specifically programmed in for each of literally millions and millions of locations, and there would still be unacceptably large database errors. Sometimes Google Maps and other GPS systems will say an address is on the left when it is actually on the right or vice versa. It may say that the address is actually out in a field.

A self-driving car might work if you live in Disney Land, but in the real world probably not so much.

In recent months Daimler has demonstrated both in Germany and Nevada so-called self-driving semi trucks. The systems demonstrated are what are in essence best described as a “super cruise control” where once the truck is being driven down a freeway the driver can press a button and the truck will steer itself with the cruise control engaged. Big trucks have had conventional cruise control systems for quite a few years. In the past few years, radar systems have been integrated into the throttle and braking systems making adaptive cruise control a reality.

Adaptive cruise control systems can be handy for maintaining adaptive speed on a busy road. However, the system quickly breaks down with vehicles that are traveling slower than the rest of the traffic. The truck’s radar-based adaptive cruise control will simply match the speed of the vehicle in front of it, unless the driver overrides it by accelerating or getting into the passing lane.

There is an occasional problem with false positives. Driving trucks with adaptive radar based systems I have had the truck slam on the brakes because of a false positive from an overpass or even from a slowing vehicle in an off ramp. On a rain or snow slickened surface slamming on the brakes could cause a jackknife or even collision from behind from someone following too close.

Another problem with radar-based cruise control and braking systems is that the sensor in the front bumper of the truck can become covered with bugs or ice and snow and the system simply stops working. Sometimes it stops working anyway for no reason, requiring the truck to be stopped and the motor turned off and back on, rebooting the cruise control electronics to try to get it to function properly again.

Aside from these mechanical problems, there’s another problem having to do with security. Have you ever wondered why in this day and age of high-resolution cameras and ubiquitous electronic surveillance systems there are still so many human security guards? There’s a very simple reason for this. The physical presence of a human being security guard scares off would-be thieves much more effectively than cameras or other surveillance devices. If something is apparently unattended by a human presence, psychologically it is much easier for would-be crooks than it is if a human being is around watching.

I expect the same thing would happen with would-be highjackers of self-driving trucks. All they would have to do to make the automated truck come to a complete stop would be to completely block its path. Then it would be a simple matter of breaking into it and stealing the cargo. The would-be thieves would likely not be deterred by the presence of cameras or even automated no trespassing warning messages broadcast over integrated speakers. There would be no human witness to injure or kill, making it an easy, even desirable target from the criminal mind’s point of view.

If you have never been a long-haul truck driver, then it is easy to look at the job from the outside and think that it consists of just driving down the freeway. While driving does constitute a considerable amount of the job, there are hidden parts of the job that are not readily apparent to someone passing a truck on a freeway.

To get an idea of what the more hidden, complicating parts of the job entails, it is helpful to think of it in terms of would it be possible for someone confined to a wheelchair to autonomously drive a long-haul truck. The truck itself could easily be modified so that a wheelchair-bound individual could drive it in much the same way that conventional automobiles can be modified. However, there’s more to the job of moving freight around than simply driving.

A fair amount of face-to-face business negotiation has to take place to set up the loading and unloading processes. With every load, the driver has to figure out how how to get to a customer’s facility, where to park the truck out of the way, and figure out where the shipping or receiving entrance is located at to take the load information or paperwork to the shipping or receiving clerk. There are virtually ALWAYS stairs involved, occasionally a lot of them, and most do not have wheelchair ramps. Upon being given a door to back into, the trailer doors must be opened and once loaded or unloaded the same doors have to be closed. The trailer wheels frequently must be adjusted to meet weight law limitations in order to make the overall weight legal. A person in a wheelchair would also have to be able to fuel the truck, check its oil and inspect it each day for potential mechanical and tire problems. They would have to devise a way of getting into the back of the trailer to sweep it out, or even load and unload on occasion. Certainly all of these problems could be overcome with vast effort and great expense, but it’s just not practical.

A self-driving truck would be even more handicapped than a person in a wheelchair. It would not be able to fuel itself, nor could it handle face-to-face negotiations. It would just be a dumb piece of equipment, easy to rob from or just ignore.

The face-to-face business negotiation aspect is far more important than it appears at first blush. This aspect is one reason that 70% of long-distance freight is moved by truck and not by rail.

As owners of Google Glass know, there is a fundamentally important real-world aspect that Google Glass engineers failed to take into account – the so-called “uncanny valley.” Human beings are creeped-out by a camera placed directly next to human eyes. On paper it must have looked great in the closed world of Google engineers. In the real world, it’s quite creepy and produces extremely negative reactions from all kinds of different people. Why not combine it with a Twilight Zone ventriloquist dummy face for the full effect?

The concept of self-driving vehicles may also look great on paper. I think there’s another so-called “uncanny valley” problem when it comes to the self-driving vehicle. I believe the average person is going to be creeped-out when they look over and see a driver with his or her super cruise control engaged either snoozing in the driver’s seat or playing with their smartphone, or perhaps not in the driver’s seat at all.

Super cruise control is close to being here. Whether it will be accepted or not remains to be seen.

As for 100% autonomous vehicles, I’m not holding my breath.

In the meantime, I want and would be willing to pay good money for a 100% autonomous toilet-cleaning robot!